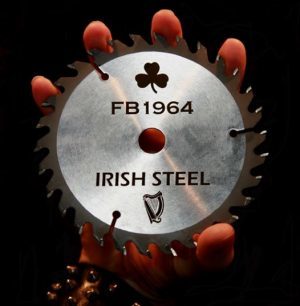 FB1964’s latest opus, Irish Steel, is essentially a folk release. Even though the band plays a progressive blend of Power Metal, and released an album entitled The Fearless Vampire Killers, they have somehow decided to make a cover album of Irish Folk songs. The strangest thing is that Irish Steel still sounds like Folk played by a Metal band, as opposed to Folk Metal or Folk music on its own (say that sentence seven times). To get a feel for all the factors at play here let’s look at every song individually.
The opener is “Sally MacLalleene”, it sounds very true to the traditional way of performing Celtic folk music. There is a vibrant energy to the vocals that definitely has the charisma of typical Irish bar tunes, however this energy sounds slightly off. It definitely feels like Power Metal vocals, which, I grant isn’t as big an issue for this song as some others, feels a bit weird when used with a traditional folk song.
“Ordinary man”, is a vastly different sounding track. It’s a working class ballad heavy with social commentary. While the acoustic guitars and the sorrowful singing might not be very Metal, the lyrics express an alienated cynicism that reminds me a bit of Martin Walkyier’s attitude in particular. Many Thrash bands have similar undertones lyrically however. Other than being acoustic, the music is nothing special although I will say even without having heard a different version of this song I feel it captures the spirit of the words very well.
But of course you can’t have just one song about women on a folk album, and “Star of the County Down” takes a more Metal approach with heavy riffs, quick drumming, and generally more rowdy vocals. It’s hard to tell whether it was just meant to be a boisterous pub song or a hard rock song but is performed in a way with some overlap (think “Living After Midnight”).
Still, you can’t have a folk album with songs about women without some sort of lament, and “Bonny Portmore” fits the bill really well. It’s a quite beautiful song driven by violins with the guitars riffs keeping time every odd beat with the drums. While I’m sure that the original folk song had no electric guitars, they at least make it a little less of a funeral dirge.
Their first instrumental of the album is “Gravel walk” which has the guitar and drums using the same timekeeping dynamic, while the violins, and pipes go crazy as only Irish music can do. The violins have a haunting type echo to them, which I personally thought was a nice touch. “Gravel walk” is the sort of thing you would play at a Samhain bonfire.
If anything on this album is really a disappointment, it will probably be “Spancil Hill”. If you look up the story behind why it was written, you’ll see it’s a pretty damn bleak concept. The performance of the song here with its extended major key power chords and the thundering vocals sounds like the slow, triumphant, glorious ending of a Power Metal ballad. In other words it does not sound like the sad, nostalgic, tragic musings of a homesick drifter. While I won’t deny that artists can do whatever they want with a song, all I’m saying is that this song was written for a specific reason and the music should reflect it (as Cruachan did in their cover). The song itself isn’t bad, it just doesn’t sound right when you know the story behind the song.
“A Man you Don’t Meet Everyday” and “Fields of Athenry” are both better takes on their source work. The latter is also more of a song you can do headbanging to which also happens to capture the trademark enunciation so common to Irish folk tunes fairly authentically.
Next song is their second instrumental, “Kesh Jig”. FB1964’s version of this song is actually more in line with what an unembellished song sounds like when one is taught to play it on the violin, so in a way it’s the best cover version I’ve heard done by any band so far.
Finally, we have the three closing songs of the album: “Black is the Colour”, “Foggy Dew”, and “Streams of Whiskey”. The most noteworthy of the three is “Streams of Whiskey”, which sounds suspiciously much like a punk song. It’s the sort of song you can mosh to and the lyrics involve taking on the world with nothing but pints of beer and a keg-load of whiskey. While I haven’t heard the original, it sounds heavy enough to do justice to any rock derivative.
Looking back at the songs on Irish Steel, the only issue is that the album sounds like an attempt was made to play folk without dropping all the non-folk aspects completely. In many of these songs it is questionable as to whether the guitars, for example, even need to be featured. And even though they’ve proved on one or two songs they can sing in a traditional Irish way, the band still struggle to get the tone right.. But as long as you have no bias in your musical taste, this album is a great selection of traditional Irish tunes, and as long as you don’t obsessively go around comparing each song to alternate versions the songs will be immensely enjoyable.