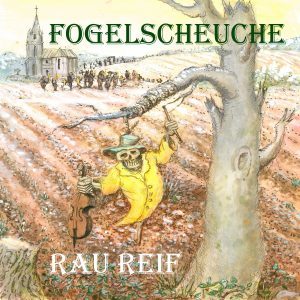 Before I start writing about the album ‘Rau Reif’, let me first explain a bit how we work at Folk-metal.nl. Every teammember can listen to a new album and then we have this list, on which you can claim an album for a review. Every now and then there is an album which remains on this list unclaimed. Sometimes it’s not very interesting, in a worse scenario there’s not a lot of nice things to tell about it.
‘Rau Reif’ is such an album which is on our list for a couple of weeks, still unclaimed. And let’s be honest, I don’t like to write something about it neither, but I will.

Today is the 2nd of April, if I would have received this album yesterday, I would have laughed about it. But as I said it’s in our possession for a few weeks. After I have listened to it for a first time, I had no intention at all to listen to it a second time, but to write something about it, I have to.
In the past when I was playing in a band myself, you sometimes wanted to record something you were playing. This was usually done with a very poor microphone, recorded on tape. The result was very poor, but it served the purpose, you can pass something on to show a friend or someone what you were doing, or use it for further work on the composition.
‘Rau Reif’ has almost the same quality. The sound is very poor, something which doesn’t seem necessary to me these days. We have received demo’s of many band, which didn’t have a lot of money, but all of them sounded better.
Then there is the way all thing are played. It seems to me the band is in the first stages of playing together. Some instruments are not timed very well, which results in a messy sound. Lyrics don’t fit the music everywhere as well. Listen to a song as ‘Zug nach Flensburg’ and it says it all. Maybe it’s the intention, but in that case, it doesn’t work out well.
The music is not to heavy folk-metal with the violin in the center of the music. Nothing wrong with that approach. Done in the right way, it could have sound very nice.

The booklet with lyrics is very nice. Drawings accompany every the lyrics of every song, and they’re in style with the front-cover. If Fogelseuche would have made the music half as nice as that, it would have been an OK album.