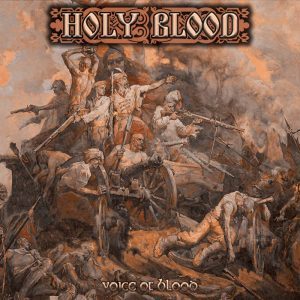 Traveling a lot for my day job recently has made me think of one thing… the narratives of a perspective storyteller and their audience. How much does a message really change when viewed from the two sides, or what if someone else tells the same story? These ideas on true objectivity consumed me while taking on this review and perhaps all other ones forth. With Holy Blood’s “Voice of Blood” we’ve arrived at my first religious metal consideration. Unlike most familiar themes on this site (and in metal), there are a very few, if any brutal bands with an emphasis on faith and an ever-certain ideology. Note that these Ukrainians have been around longer than some of us can sneeze at with their fifth full-length release. Glancing over the 17-year long history reveals non-stop lineup reconfigurations with seemingly only one current member, mastermind Fedor Buzilevich on vocals and flute, previously rhythm guitar.

So of course, my Ukrainian half was more than intrigued yet rather perturbed as well; the first couple listens yielding a folkish deathy doom metal aura. Holy Blood flaunt religious lyrical themes with mostly-illegible, lower frequency growls, slower tempos and atmospheric baritone chants and hymns. This religious flavor makes everything noticeably more somber, starting with a nice guitar melody in the opener following the intro. Third track also stood out with some nice bell tolls for the full effect of Soviet nostalgia…УУУУУУ-КРААААА-ИИИИИИ-НАААААА! Beginning of the Revival of the Kievan Rus is another one of note.

Going back to my original thesis however, the referenced controversies rooted in Russian and Ukrainian politics among the adversities between the progressive and conservative narrative have me torn on this band and album.  To be honest, it’s all a bit one toned sometimes, despite the clever and creative flute melodies throughout. My internal turmoiled controversy further materializes when considering what I would choose to listen to in my spare time and Holy Blood is sadly at the lower half of the list. This is because I’m a weirdo, in many ways, but specifically when it comes to the power of positivity. So, if you were expecting similarities to Slavic metal acts like Arkona or Leshak, like me, you won’t find them here regardless of the relentless brutality Holy Blood delivers. To be fair, this is not what they set out to do and obviously has never been their motivation or inclination, they are of their own flavor.As it remains quite difficult to refrain from subjective bias and conversations of a political nature, I ultimately admire the musicianship here, just not the message but you certainly have to be in a mood for Voice of Blood, a successful melodrama.