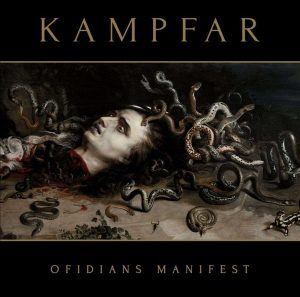 Now 25 years into their career, Norway’s Kampfar have often found themselves overlooked in favour of their more renowned peers, but when it comes to quality Pagan Black Metal, they really are head and shoulders above the pack. They are peerless in respect of their uncanny knack for drawing the unsuspecting listener into their dark world and creating an undeniable, underlying sense of dread and menace.  You are occasionally given a brief reprieve from the chaos with some piano here (Natt) or clean vocal chants there (Eremitt), before being grabbed by the throat and dragged back into the darkness.

Opener, Syndefall sets the tone nicely with the sound of tortured screams, which gives way to pummelling drums, ice cold guitars and Dolk’s unique and unmistakable vocals, which veer wildly between tormented howls and raspy groans. From there on in Ofidians Manifest is classic Kampfar with its distinctly sinister Norwegian Black Metal backbone, underscored by an infectious and melodic groove. The production is crisp and clean, weaving the individual components into a beautiful sonic tapestry, while simultaneously making each instrument sound like the star of the show.

It’s hard to pick standout tracks as Kampfar albums should be listened to as a whole, but if you are new to the band, I’d recommend checking out Eremitt, Ophidian or the deliciously dark, Det Sorte (quite literally, The Black in English).  This is a band which gets better with each subsequent release and deserves to be spoken of in the same tones of reverence as their more respected peers, such as Primordial or Enslaved. Ofidians Manifest is a definite contender for album of the year.