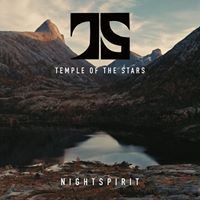 Well, it has been relatively quiet this year from the Land Of A Thousand Lakes (that’s Finland BTW) with the exception of the latest Korpiklaani. While we wait for something new from the pantheon of amazing folk metal acts, there is always room for someone new and that has just arrived in the debut by Temple Of The Stars. With no previous release that I can find in an early demo, this looks to be the first in 8 tracks around 42 minutes titled “Nightspirit”. Folk metal from Finland has numerous sub categories and I don’t know if I could put TOTS into one that feels 100%. They are not humppa, black, thrashy, etc. but land somewhere between progressive and traditional folk. I would probably have to venture to other shores for similar or reminiscent bands in maybe some Ash of Ashes or Utmarken with some of more recent Fates Warning. These still aren’t really close but I’m putting you as close as I could come up with. TOTS is technically a one-man project of Tobias Tåg who is the vocalist and multi-instrumentalist with another player or two helping to finish the album. Before you listen to the album you can certainly check out videos of two of the tracks to get the overall feel in “Nightspirit” and “Lands Of Old”. What makes TOTS great is the ease of the sound with whistle as primary folk instrument, his alluring vocals and a somewhat accessible sound. I think that all of these could be viewed as the biggest issues with TOTS. There is not a lot of variation in tempo, style or feel/direction of the tracks and starts to sound a little one-dimensional despite being really good. As one-man projects go, this is usually the issue in having only one viewpoint in terms of direction and sound. I tend to like more extreme stuff, but I found this to be above average as I think can tell a lot of time was put into the songwriting and overall performances. Nothing feels jammed together but very cohesive and natural. The sound is nice and even although not super edgy in terms of the metal…..almost ethereal with a little haze to it. There are some live dates coming up so the chance that this material could be heavier in a live setting is appealing. A great first go around for Temple Of The Stars with hopes a 2nd effort shows a little more diversity while retaining their core sound.

Temple of the Stars