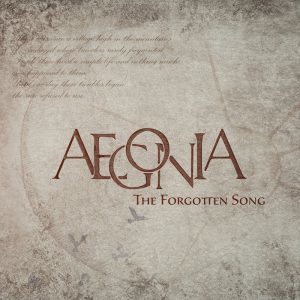 One of the most common remarks I hear when speaking about relatively specific types of Metal is that there are too many different sub-genres. In many cases, not being specific enough with the name of a sub-genre would fail to do justice to the music they play, which is definitely the case with the Bulgarian band Aegonia. Encyclopedia Metallum lists them as being a blend of Gothic and Doom Metal while the band describes themselves as Atmospheric Gothic Metal. After listening to their debut release, The Forgotten Song, I cannot think of any better name for the music they play. In past reviews, I’ve torn into the various pitfalls of both Gothic Metal and Atmospheric Black Metal, such as the repetitive riffing and the monotonous drumming. In the literary and film use of the word Gothic, there are typically very emotionally stirring plot devices, frequently drawing from a fear of the unknown inherent in nature, using it to establish a horrific atmosphere. Looking at The Forgotten Song one finds an album that embodies this method of storytelling from it’s dreary acoustic intro to the dreary acoustic outro, combining neoclassical influences with occasional acoustic folk melodies and at least one sound effect collection’s worth of nature sounds keeping the same haunting sound.
Storytelling appears to be the main emphasis of the album considering how much effort is put into creating a haunted forest soundtrack for the already fairly ambient music. However, the storytelling here focuses more on embellishing the music than creating a concept album (as usual the story behind the music probably requires either liner notes or maybe a synopsis to be fully appreciated). The vocals also attempt to create that keening sound that makes some traditional Celtic singers sound so eerie (for a Metal example, think Karen Gillian on Cruachan’s Middle Kingdom). While it is debatable whether the vocals themselves sound as intended, some of the techniques amplify the effect, like the dissonant pitch bending on some of the tracks, the usual contrast between the minor soprano and the growling vocals on “Battles Lost and Won”, or the added echoes and reverb in songs like “Rain of Tears” and “With the Mists She came” among others. Overall, there is clearly a praiseworthy amount of effort that went into creating the album in terms of the editing and musical skill required. The group’s mastery of composition can be found by simply looking at the classical influences on this album alone, which manage to steer the entire album in a neoclassical folk direction while keeping enough Metal influences in the mix to keep their credibility. The main issue with the album is the track “the offer”, which exemplifies everything that could have gone wrong in taking a Gothic Metal approach with an album like this (lyrics are whiny in places and the songwriting is telegraphed, which is awful because they clearly can do better). Aside from the one track the album is a bit light in the gloves as implied earlier, and while it can be argued folk metal itself isn’t the heaviest genre, the music on The Forgotten Song lacks the intensity or energy that Metal is known for.
If I were to assess whether Aegonia’s first effort was a good Metal album, I would probably say yes. If I were asked whether it was a great piece of art the answer would also be yes. While it isn’t Gothic rock, it manages to employ Gothic horror conventions with classical musical sentiments to create something that is still Metal but also has an immersive atmosphere, relatable lyrics, and a compelling sense of sorrow accompanying it. While it isn’t the heaviest album, the effort and creativity that went into this album makes for a satisfying listen for those who can appreciate the complexity it brings.