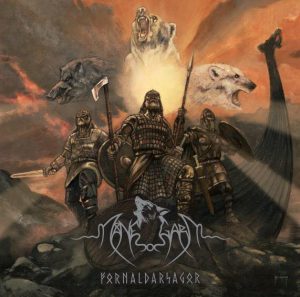 A few years ago I took a friend of mine to a festival, filled with black, pagan and folk metal bands. One of the performing bands was Manegarm. I enjoyed the gig massively. My friend, who isn’t that into metal, didn’t understand why I liked this gig so much better than most of the other bands. That’s the thing about Manegarm. Somehow they are in a league of their own. Just like Amorphis, or Volbeat are in other parts of the metal world. In a world full of similar sounding bands, they always stand out. The sound is directly recognizable, the vocals are unique, the use of a violin, the melodies as well. That’s not saying Manegarm makes the same album over and over again. Because they don’t. In fact, the band has had to put up with quite some criticism from fans and press concerning their latest two albums. And rightfully so, I would think. These albums were lacking a bit of the uniqueness that had made the band so great. This album will again welcome Manegarm in the hearts of fans and press alike.

What’s new? Well, founding member Jonas Almquist has left the band, due to health problems. As a trio, the sound hasn’t changed much, though. It’s still immediately clear that this is still Manegarm. Furthermore the lyrics are once again exclusively sung in Swedish. Not clear if this decision originated in the criticism over the last few albums, but it suits the band perfectly. The foreign language adds to the folky feel, as is does with many bands in the genre.

Speaking of genre, let’s briefly talk about that. Instruments are basically your standard metal drums, bass and guitar. The violin in for instance ‘Krakes sista strid’ adds a folky feel. Vocals are mainly raw, but understandable. Melodies are folky as well. Most songs would sound friendly when played acoustically. Which the band has done on previous occasions and may do again with songs from this album. Powerful double bass and eruptions of violence add a black metal part. Lyrics are typically about Swedish history, so the pagan angle is there as well. The band feels comfortable singing little harmony parts and stepping off the gas more than once. So there is enough time to catch your breath between the fast, harsh and pounding metal songs.

Best songs for me are Hervors arv and Tvenne drömmar. These songs bring back memories of great albums like Nattvasen and Vargstenen. This album however is more versatile and mature. And yet more accessible. Which for the metal lovers who only want violence and aggression may be slightly off putting. Last song Dödskvädet is mainly acoustic, displaying the band’s craftmanship once again. A less great song as Ett sista farväl is still good. And if your weakest song is still good, you know you’ve made a great album.