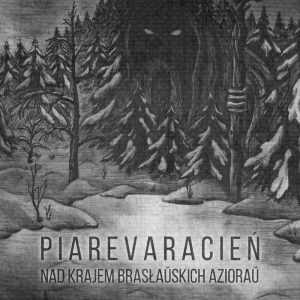 Yes, that is quite a mouthful in band name and album you are reading there. Despite knowing who they are, Piarevaracien probably have one of the most difficult names to comprehend in all of metal. (translation I am getting is “Werewolf”) Hailing from Minsk, Belarus they have been in business since 2004 and have just issued their 6th full length entitled “Nad Krajem Braslauskich Aziorau”….sorry couldn’t really get a translation that worked. That being said, for a band that has been around for 15 years, they do seem to be pretty enigmatic. No Facebook, no current lineup info…..very low key and pretty underground for the most part. I’m sure I have a few of their previous releases and probably a track or two on a compilation. The new album features 7 tracks at almost 34 minutes for their label Crush The Desert which is co-releasing this with Werewolf from Poland. Comparing to other acts familiar to us from Belarus, the closest may be old Wartha (now Vojstrau) but more pagan if anything. The band do self-describe themselves as pagan folk black metal which I guess works but not the blackest metal I’ve heard. This primarily is guitar, bass, drums and vocals with all tracks being presumably in Belarusian……although there is a strange instrument at the beginning of “Kraj” which I could be convinced is keyboard or oddly distorted bass and gives the whole track an almost dance club vibe. “Pusteca” is the folkiest track here with what sounds like strings which you hear at other points throughout the album but again I think is keyboard work. Vocally, there is a wide variety here from screechy to brooding to groans so a nice variety to give some different texture. While my expectations were somewhat above average, I have to say I was disappointed by this whole effort. The tracks really don’t seem to go anywhere and languish in mid tempos and riffs that are nothing new or exciting. I think the overall production hurts this release as well with a very muted presentation bordering on old analog…..look I think there is a place for low fi stuff but I think this album would have definitely benefitted from a real solid mix and mastering. I still think they have some decent material and are worth checking out but “Nad Krajem….” Is not the best of what they have to offer….