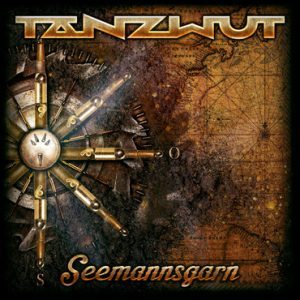 It’s time for a new Tanzwut album again. This time it took almost three years to release a new album, an unusual time span for this German Medieval Rockers. Are there major changes in this album? No, the band is still on the slightly more solid path, they took with the album ‘Höllenfahrt in 2013’.

With the title-track ‘Seemannsgarn’ the album immediately sets of in the typical solid Medieval style we’re used to from Tanzwut. The second track ‘Galgenvoegel’ reminded me a bit of their German colleagues of Vogelfrey and the next one ‘Reden is Silber’ of Letzte Instanz. But maybe this is a trick of the mind and Germany has so many Medieval Rock bands it’s no wonder a song tends to lean a bit to one of the other bands. Like we’re used to Tanzwut is a bit on the dark side lyrical-wise. And they like to be critical every now and then as well, the perfect blend of these is ‘Schwarzes Gold’ (Black Gold) about the dark side of the oil-industry.
And talking about poets from the dark side, there was a famous one in Paris about 600 years ago. Tanzwut’s singer Teufel is obviously a fan of this poet and it’s in fact only a wonder why it took so long before as ‘Francois Villion’ was written.

The only thing missing in this album is a song with the wow-factor. All songs are very nice, but there is no song I would put in my ‘eternal playlist’.
What remains is again a very nice album by Tanzwut, they give their fans exactly what they’re waiting for: an album full of solid Medieval rock with dark lyrics by Teufel. What else could a Tanzwut fan wish for?