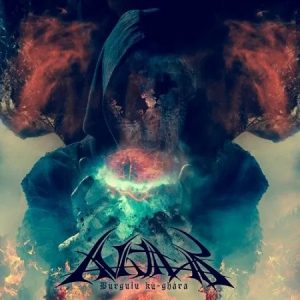 Over the past 15 years or so, the Finish Tolkien symphonic Black-metallers, Avathar have released morsels of material at a time, publishing only demos following the introduction of two full lengths in 2004, remaining silent since 2010. Comprised of 6 remastered, 2 covers and a few new tracks, Burgulu ku-ghara loosely translated as Shadows from Time, is Avathar’s first full length since. Due to this arrangement there really isn’t a cohesive concept to the album, where one track stems into another. Rather a mashup of the recent bests with similarities and there are more demos yet to be compiled. Released under Gollum’s Treasure who supports fantasy themed acts alone, each track is a standalone feature and at 90 minutes total, the album can become quite difficult to grasp in one, two, or even three listens. But that’s probably my only complaint here; overall this album is fire forged from the depths of Sauron’s hellish glare.
Avathar is a dark land in south Aman between the mountains and the sea in J.R.R. Tolkien’s Middle- earth. The band Avathar conveys that fantastic mythological place well, enveloping the audience in an auditory fog rolling in of wind and string instruments culminating in an onslaught of riffing melodies and tempos, with clean and harsh multi-gendered vocals possessing quite a grandiose atmosphere. The gravity of this ensemble immediately indicates the talent and suddenly I’m left wondering why it’s my first-time hearing of them. It’s difficult choosing one favorite track and their extensive lengths do become unnoticeable. I’m immediately drawn to Witch King’s sharp shrieks on some songs and conversely, powerful deep and ominous gnarls on others. There’s an obvious consistent melodic tempo and theme for each with drums blasting, varied hymns and chorus, and backing guitars rooted in piercing key overtones. If forced to pick, Autumn of Lothlorian stands out, opening with pulverizing spoken word, presumably in Finnish overlaid in English, showcasing an almost paganlike quality. Delightedly about midway, appears a lovely clean feminine voice contrasted to a super funky bass line further adding evidence to Avathar’s emerging versatility. The Gloomweaver intro reminded me of being kid messing around on the piano attempting to create the bleakest lick at the farthest left reaches of the octave spectrum. Then breaking up the album, an upbeat tempo picks up into The Great Battle and Kodatettu is solid. Houses of Pain is yet another outstanding track with likely the heaviest variation on the vocals. The following prolonged intros could get lost to shortened attention spans. Among other minor hiccups, some brief rather mundane repetitive parts from Under the Waves. Even so, the choral guitar melody ultimately penetrates my soul. Speaking of, I’m deceived by Come Down with Us intro resembling Moonsorrow, but the rest of the song steers clear of that indication. An epic Sharp Glance completes Burgulu ku-ghara and despite not being overly or overtly complex and explorative, it stands out as deeply emotional and effective.
Avathar, and perhaps Tolkein metal in general, are seemingly underrated which creates hurdles in album production with Burulu ku-ghara remaining only on digital copy. Given more exposure and vigor, I see Avathar potentially becoming a varied contemporary face of Folk Metal in Tolkienist form.