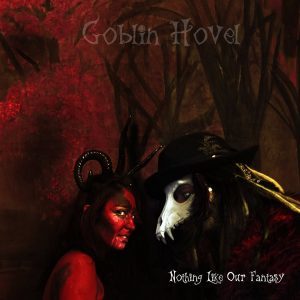 Goblin Hovel is still an enigma on some level for me and I think I may be as “in the know” as anyone. Social media was making it seem like a break was coming for the Goblin clan and then, like a meteor, a new EP drops from out of nowhere. Well, sure I saw the cover and knew it was getting mixed but then boom, it arrived on Bandcamp. “Nothing Like Our Fantasy” is 5 tracks and shows the diversity and quirkiness with as close to a cross section of all of their styles in one concise package. I think calling them “Metallic Folk” is perfect for a basic direction in their sound but they are so much more than that. There is 27 minutes of tuneage here and while I thought that Wolcensmen may have wrapped up the EP of the year, this may now be my front runner. For the last few years, Goblin Hovel has been a collective of musicians churning out numerous successful releases, including 2016’s “Revered Revenant Of Irreverence” which is still their crowning achievement being a top 10 for that year for me. This new EP sees the head Goblin going it alone on every aspect of the music and vocals, which is a huge accomplishment. He has been able to go back to his solo routine (originally, he was the lone member) and yet still incorporates the feel/musicality of his prior/current bandmates. I would like to say he captured the essence and channeled them all on here. If you like heavier, opening track “Urgischk”, “Le Chateau Hante” and “The Daemon Engine” are all throbbing and churning death rolls, equal parts controlled cacophony and methodical construction. “A Night At The Festival” goes to that campier side and has a swingy/blues feel while “Forests Of Painted Bone” really strips it all down to emotional and introspection perfection. Vocally, Goblin goes into his bag of tricks to either go super dark and doomy, frantic and banshee, upbeat or downcast and forlorn. Musically, there are too many layers to this opera to really get super detailed on but guitar, cello and percussion elements are at the forefront along with some wind and various percussion/cymbal like instruments. While I hope this is not the end of the alliance of all things Goblin Hovel with multiple members, head Goblin has shown he can do it alone. I love the overall sound for as much that is going on here too…..pretty natural sounding and has a nice liveliness to it. Being on constant repeat for a week now and I’m still not sick of it…..and I’m sure it has the legs to finish as a top EP for 2019. Another amazing piece of work from GH.