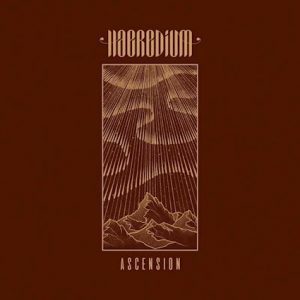 Creativity and ambition are almost universally a plus when it comes to writing an album. Wide ranges of musical influences are pretty much guaranteed to yield something that sounds completely new and original. If both the previous sentences are correct, it logically follows that both conditions on albums can only make the album better, right? Well, on Ascension there definitely is very original and dynamic songwriting. The heavy influences from other genres such as Jazz, Blues, and Eastern European folk music are both a blessing and a curse. Blues has close ties to Heavy Metal, Black Sabbath and especially Dio put forth several releases influenced by it. Jazz structures are less common in my experience, but the Canadian Doom Metal band Völur comes to mind. It is possible for even wider ranges of musical influences to be implemented as well, as long as the genres are at least tangentially related (a good example is the guitars on Cruachan’s Nine Years of Blood which draws on everything from Thrash to Thin Lizzy). On Ascension, the singular pitfall is the sheer magnitude of musical influences present. Certain songs barely even sound like Metal, and while they by no means sound bad, they typically keep changing things up so abruptly it takes some getting used to. That being said before delving into a brief summary of each song, I would like to praise the one thing that prevents the quick changes between songs from sounding out of place or awkward – the intros. There is a very distinctive and usually virtuosic intro formula used on every song (think the type of melodic intro you would find in an Iron Maiden or HammerFall song) that helps a type of natural order emerge on the album. The necessity for some pattern can be seen from looking at the essence of each song.
“Wandering” is literally just whistling in an unnervingly quiet background. There was a really weird feeling of suspense I got from listening to the track. In hindsight I think it was intentionally used to build up anticipation. Then right off the bat, there’s a jazzy guitar intro on “Breathe”, which is actually one of the more Metal takes on any of their eclectic influences. “Breathe” changes things up effectively and quickly, and the folk melodies trade off the leading role in the music throughout the song. The vocals are easy to discern, as on the rest of the album and uses vivid imagery introducing to the self-discovery theme being represented as a physical journey in the lyrics. “Images|Recall” switches to a more traditional Heavy Metal approach, and once again the melodic leads alternate between instruments, in this case guitars, violins, and keyboards. Another abrupt genre shift happens with “Merchant of Lies”, which is effectively a cabaret-inspired song of the sort that bands like the Marquis of Vaudeville plays down to the scratched-gramophone spoken part in the middle of the song. Then “Fall” begins with Eastern European acoustic leads while keeping heavier electric rhythm guitars. “Fall” is followed with an instrumental entitled “Euforio” which is even more jazz influenced than anything else on the album and even has a hammond organ. “Euforio” is a great song, especially with the alternating leads and multiple styles presented without any sort of confusion or jumble. However, the absence of either Folk or Metal on the song makes it a bit more difficult to appreciate due to, again, the abrupt changes in style. “From Silence” is the only song I will actually say is bad, and even then the only bad part is the ending which is two full minutes of Chopin worship. Aside from the piano solo, the lyrics involve the rising of the silent generation or something similar. Ironically enough, the words of this song should have been the most memorable and catchy on the album on paper. “Winds will turn” goes back to a Rock approach and features choirs extensively with a central theme of following your own path. One of two French songs on the albums follow, entitled “Alpha Ursae Minoris”. From what I can tell, the song is a space traveling metaphor for writing your own destiny (even without knowing the language, the lyrics can be guessed from the trend the album has going). There is a much quicker tempo to “Alpha Ursae Minoris”, and the track feels a bit more intense than most of what came before it. “Joyride” opts for a retro-guitar sound that alternates with pianos reminiscent of old rockabilly music, introducing yet another musical influence. “Soif d’Affronts et de Victoires” is the second French language song on the album and is followed by “Storyteller”. Both songs run a bit longer and have noticeable folk influences but with different approaches. Neither of them is bad, but “Soif d’Affronts et de Victoires” has the best atmosphere.
Returning to my original critique of the album, it is evident that bombarding the listener with every musical approach from Jazz to Chopin derivatives is problematic from a consistency perspective. However, because the songs generally follow a similar compositional structure (which would normally have the potential for lots of musical recycling), there is a thread which ties all the songs together. With the exception of “From Silence”, the music is dynamic and original enough to stay interesting. Although I will end off this review with a disclaimer: Ascension is not purely Folk, nor is it mostly Metal. It knows what it is and may sacrifice some wider appeal for it’s own direction. In many ways, that sentiment is arguably where Haeredium’s Metal background shows.