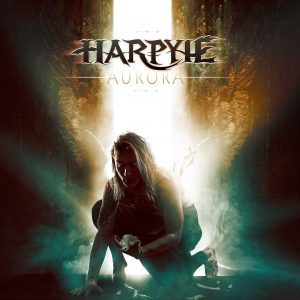 Harpyie will release a new album this month. It’s their sixth album to me, because I’m of the opinion you can see their previous release, the re-make of their debut-album ‘Blindflug’ as a stand-alone album.
And it’s the sixth one I get to review. That’s because the medieval rock album aren’t very popular to review by our teammembers, and I think Harpyie has an extra problem. When I started to listen, I immediately was of the opinion, the band was back where they started. And I wasn’t to keen on their first albums. But you should just take the time to listen to it many more times. It’s quite a hard nut to crack, but when you get used to their style the underlying beauty gets to the surface.
One more advise: when you listen to it first, it looks like it doesn’t need a lot of volume. Please turn the volume up quite a bit, the music really opens up when give it some volume.
The band has found it’s style with a mixture of all kind of genres. The solid foundation is still the medieval rock and metal, but the band included all kinds of modern styles in their sound. Which is quite hazardous, since the medieval and folky sounds seem to be left untouched and only upgraded in this genre. But all kind of band prove you can surely mix folk and medieval stuff with metal-core and other styles. Just listen to bands like Zmey Gorynich, Folcore, Cruadalach and Niburta for instance.
Harpyie doesn’t sound like any of these bands but with their bombastic elements they fill in a nice niche.
Sure there are a few somewhat weaker songs on this album, ‘Ikarus’ for instance doesn’t really work for me. But songs like ‘Sternefeuer’, ‘Blut und Spiele’, Kompassrosen Welken Nicht’ and ‘Winternachtsdraum’ really make up for this.
The band has really found theirselves a nice new spot in the scene and they really distinguish themselves in style from the other bands in the medieval scene.

A very nice album, the only problem is, you have to give it quite a few spins before it becomes interesting.
But take your time for it and it becomes very nice.