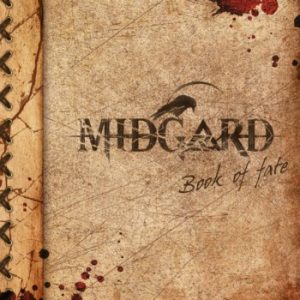 Ukrainian Death Metallers Midgard have somehow made Power Metal absolutely brutal. While there are definitely some Metal fans who might frown on the comparison of a folk influenced Death Metal band with Power Metal, there are certain musical elements that, while not exclusive to Power Metal, are trademarks of the genre. High-speed double bass drumming with elaborate, over-the-top shredding is used extensively (some might say even to the point of absurdity) in the aforementioned genre. Death Metal itself also uses much the same approach, albeit with a noticeably different sound. On Book of Fate, Midgard effectively creates that characteristic victoriously-uplifting atmosphere of Power Metal while keeping staunchly within the confines of their own genre.

“Dragon” begins with hammer on the anvil guitar riffing with very heavy drum beat and then turns into a high speed shred session before the song even picks up momentum. Flutes and other folk instruments are quite light and only show up for embellishment (an approach taken with background sound effects on some parts of the album).

One of several battle themed songs on the album, “Black Drakkar”, has a very similar style to the previously covered track. The main problem with this song, however, is the fact that the musical phrasing repeats just one or two times too many. In spite of this, on “Black Drakkar”, the energy of the vocals and the general prelude-to-bloodshed lyrics draws attention away from any repetition.

More somber than the topic of Varangian mercenaries is the dark lyrics of “Hero”. Thematically, they seems to describe the effect of endless war on an idealist’s psyche. But the song could be about Elder Scrolls, since those words appear in the lyrics, especially considering the fact that Witcher and Game of Thrones have their own songs on the album already. Heavy, but relatively slow guitar riffs are favored outside the solo and breakdowns, with some ambient noises like eagle cries used in the sparing way the song “Dragon” uses folk instrumentation.

“From Fire” is the longest song on the album and consequently has much the same problems as many other songs in excess of 10 minutes. Aside from technical concerns, the opening doesn’t match the rest of the song; in fact, it actually sounds like the intro to a LEAH song, or world music in the vein of Enya. However, throughout the song, heavy riffing and relentless breakdowns offset the monotonous drumming and repeated riffs that occur on some parts of the song.

The songs “Iron Throne” and “The Witcher” are about Game of Thrones and The Witcher, respectively. Of these two songs, the first starts out like some sort of Doom Metal song, only to change up to chunky riffing and the usual unyielding drum frenzy. “The Witcher”, on the other hand, makes more extensive use of folk instrumentation and uses clean singing to a much greater degree.

As with almost any Viking-themed bands, Midgard has an eponymously entitled song about Ragnarok. In their take on the tale there is a comparatively greater emphasis on melody and virtuosity than on some of the other songs on the album, and there are several blitzed breakdowns that lend just enough energy to the music to keep it interesting.

Of all the songs on this album, “Witchammer” is the song that bears the strongest resemblance to Power Metal in the way I outlined at the start of this review. It’s epic sounding shredding in a major key slightly downtempo from the vocals, drums and other instruments makes the song feel a bit like an Ensiferum song (coincidentally, there happens to be an Ensiferum cover song on the album as well).

The last three songs are cover songs for “Token of Time”, and “Trollhammeren” respectively, as well as the title song of their debut album “Wolf Clan”. For all that’s been said already, Book of Fate really is a solid album with well-coordinated lyrical and folk embellishments to already-excellent Death Metal. Interestingly enough, quite a few songs in addition to “Wolf Clan” have been re-used from the band’s previous release.