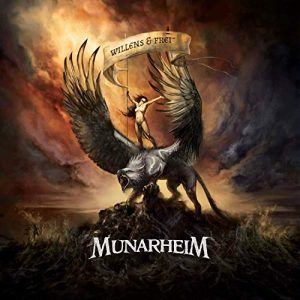 Willens & Frei is the third full-length album from German Symphonic Metallers, Munarheim. Yes, you read that right, because as far as I am concerned, like many other bands that find them classified as such, Munarheim are not Folk Metal at all, rather they are a Symphonic Metal band with some occasional Folk flourishes. Of course, there isn’t anything wrong with that, but I just think that it’s important that you, the reader, know what you are going to be listening to and don’t end up being disappointed as I have been on many occasions. I’d say that the likes of Equilibrium, Battlelore, Leaves Eyes, Turisas and occasionally but to a lesser extent, Nightwish are all fair points of comparison.

Firstly, I’ll start with the things I liked about this release, starting with the harsh vocals, which are a definite plus for me and give the songs an air of early Wolfchant / Equilibrium. There are also some very nice melodies to be found throughout the album and it is nothing if not spectacularly bombastic. I can only imagine just how well these songs would transfer to a live setting, preferably at a big European festival such as Wacken or Rock am Ring, but I digress. I freely admit that I was far from won over at first, but Willens & Frei is an album which improves with repeat listens. The choral backing vocals, which grated on me at first, started to make more sense the third time around and I actually think they give Munarheim something which makes them stand out from the pack. Conversely though, I think that they need to be scaled back a bit and used more sparingly in future as this would lend them more power and impact as opposed to the predictability of the current song arrangements.

The only really glaring negative for me are the faux Celtic style flutes on “Mosaik”, “Vergebung” and “Auf ihr Gefährten” which I found particularly irritating, so much so that I actually ended up skipping all three tracks before they finished. It is on the last two songs that “Willens & Frei” finally realises its potential and makes its mark. Both “Feuer & Schwart” and “Mein Weg” sound for all the world like they could have been lost tracks from Equilbrium’s Sagas album, which is absolutely not a bad thing.

In conclusion, the track listing could have been arranged a little better to improve the flow of the album, as it loses its momentum a little around the midpoint, but after all is said and done, Willens & Frei isn’t a great album, neither is it a bad one. Rather it is a competent, but frustratingly inconsistent release from a band still finding its feet, but from which I expect bigger and better things in the coming years.