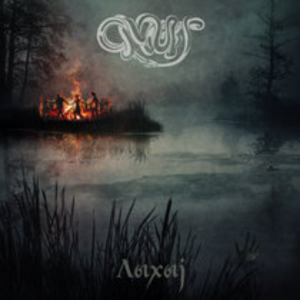 This EP by Omut took me by surprise, because of its infallible quality and because the band has been moving under my radar for ages. After listening to the first couple of songs, it became apparent to me that I was dealing with Belorussia’s best-kept secret. This is a gem from right down the folk metal treasure-hoard, water from the spring that keeps on flowing for several decades now, quenching our thirst with honest art. Needless to say I immediately bought it from Bandcamp and gave it the proper loud playback treatment.
Omut’s folk metal belongs to the Slavic vein and is traditionally made, out of metal strings, folk instruments and pounding drums. The band is not only talented but also accomplished. It’s obvious they haven’t wasted the five years that have passed since their first full-length release – which by the way was particularly decent for a first attempt. This proves their love in what they do and their devotion for the long run. The four songs (plus an intro) of the 19-minute long Lykhyj are thoroughly thought-out and skillfully executed. Musicality is the key that binds it all and makes it solid, and brutality is kept at its service. As a result, Omut give-out a powerful artistic signal. Lykhyj is an all-weather album that is played and enjoyed from start to finish.
There’s hardly anything else to write about it. Omut advance themselves to the top-league of European folk metal and a few steps away from perfection. Hopefully, we shall get to experience them taking these steps in their coming works.Regards, Kallimachos