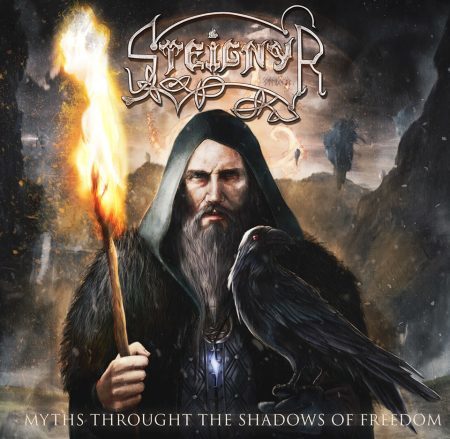 Spain’s Steignyr are ready to embark on another journey of epicness and you can come along with them. Their 4th full length “Myths Through The Shadows Of Freedom” is set for release on June 14th via their label Art Gates Records. At 13 tracks and over 64 minutes, the album features all new tracks (at least nothing that I know released previously). We have reviewed their previous albums on here rather favorably and this album will overall get one from me as well with some criticism. I have strayed away from reviewing previous albums for one primary reason…. sound quality. I am not some audio purist, but I think the overall sound/mix/mastering/whatever inhibits the impact of the album. I find it to be very flat and somewhat disconnected in various areas throughout. Leaving that opinion aside, let us delve into the album which I found to be thoroughly enjoyable and a very accessible listen. The tracks are not super complicated and they play a familiar version of folk metal….. somewhere in between Ensiferum and Winterhymn. There are flashes of the battle stuff and symphonic stuff mixed in each track. While they have described themselves as having Celtic influences, I really don’t hear it much. Vocally, the brooding heavy vocals make a nice counterpoint to the symphonicness of the music. As a 5 piece they rely on keyboardist/vocalist Lena to create the folk instrumentation which does work here. The tracks range from 3 ½ to a pair over 7 minutes (“Frozen In Time” and the title track) so a nice range. I’m not sure if I have specific highlight although I thought the almost 7-minute-long instrumental “Moonlight Forest” was a nice selection in the middle of the album. I didn’t have a pre-conceived notion of the album before I started listening and was almost immediately reminded of why I wasn’t as keen on their previous efforts and again it is the sound concerns. Besides the quality/mix/etc I was somewhat disappointed by the lack of attention to some of the guitar parts sounding (for lack of a better expression) sloppy and not as finished as could be…. harmonies just a little off and some parts that didn’t feel 100% like the best. I probably hear about 500 albums a year, so I know what I like and don’t like, and this doesn’t have the perfection needed to rise above the rest. A good album? In fact, it is better than good and a fun listen but will not have the punch it could have had some of the finishing details been addressed.