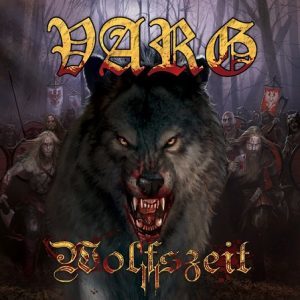 I haven’t decided yet if there are certain criteria for what makes for a worthwhile re-issue or for that matter, one that has been completely redone. Although not a widely done practice, I have heard some moderately successful releases (not necessarily folk metal related), but most seem to fall flat, sound tired and most of all reek of a desperate money grab. Thankfully, Varg have done one as completely killer as possible and it works on numerous levels. Originally released in 2007, “Wolfszeit” (let’s call it “Wolf Time”) is their debut full length and has been rerecorded and issued by their label Napalm. Being somewhat familiar with the original, I dove first into that again before the new version. I definitely feel they had a more pagan metal sound originally, not only musically but lyrically reminding me a lot of classic Mithotyn, Heidevolk or maybe some Manegarm. So how does the new one stack up? It’s almost like listening to 3 entirely different albums in 1….sounds hard to wrap your head around but I will try to explain. First, you listen to it like it’s the original with a much better overall, fuller sound. Secondly, these are redone versions but pretty close to the original versions of the tracks with maybe some slight arrangement changes and I believe tuned differently. Lastly, it almost sounds like an entirely new album with influence of more recent material/albums integrated into the tracks…..there you have it, 3 in 1. If you are a new fan, you may think this is a new album and be none the wiser as it has a contemporary feel on par with the recent material. I think it shows that the original stuff really holds up. The maturity shines thru in the lack of extra tricks thrown in or trying to revamp already tight tracks into something entirely different….it is true to the original but just sounds refreshed for 2019. Most of all, it still has the fire and doesn’t sound like a half-hearted attempt at a remake. The tracks are sung in German (as were the originals) and I think this may have been the only missed opportunity….an English version would have been stellar to hear. Probably not something you will see a lot of down the road, but Varg have done an outstanding job of revisiting an awesome album and making yet again another killer album.