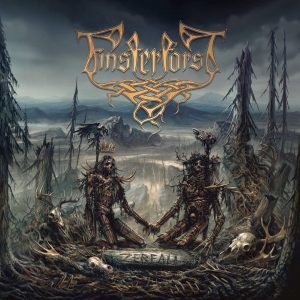 Finsterforst’s Zum Tode Him has been a pinnacle in my folk-metal library for over 10 years now though many things have changed for me and for the band alike in that time, but just like fine wine, we’ve evolved and matured nicely. As the fifth full-length release, Zerfall is scheduled to publish August 2nd and while a couple shortened teaser and the title tracks have been bestowed onto the world, we at Folk-Metal had privilege to the entire album early; lucky me! Finsterforst’s most recent release in 2016, titled #YOLO threw many fans for a loop. Such seemingly serious musicians publishing spoofs and covers? Oh yah, and what glorious fun it was! A nice surprise, reminding us of the sillier side of folk metal. However, #YOLO and Hangover are very seriously anthems. Zerfall, meaning something like disintegration or decay is certainly different, resembling Mach Dich Frei more with the trademark Finsterforst sound that #YOLO had just in a different package.

Based on what’s probably a biased perspective, I was enthralled from the get-go. First track called Wut instantly stood out for its vocals in lockstep with the rhythm and timing scheme between guitar and folk instruments, furthermore the slow intermezzo breakdown reminds me of a Uriah Heep lick I can’t put my finger on. Second title track Zerfall included with a brand spanking new video, filmed at a lost brewery, is hands down my favorite chorus melody off the album, hell favorite melody of the year! Wish I knew German to better sing along. The poignant and powerful, un-obsequiously increased clean vocals complement sophisticated melodies and are well developed into the rhythmic tiers. Fluch des Seins is also choir focused, particularly the portion that was pre-released. The sections to follow offer a deeper exploration into the song’s theme, with a heavier atmosphere showcasing an emotive guitar solo, tying everything together completely.  Weltenbrand, is yet another multidimensional track that weaves in and out of acoustic and heavy breakdowns with deeply pleading clean vocals. Finally, Ecce Homo, Latin for Behold the Man culminates the album in an epic 36-minute masterpiece.

This latest effort from Finsterforst is engaging and versatile from start to finish with the shortest song clocking over 8 minutes. Zerfall is not a quick listen that requires certain intent and commitment, for which you are handsomely rewarded with an astounding experience of talented post black pagan metal, complete with complex, well thought-out track structures and magnitudes of layered instrumental atmospheres that finalize an emotionally thematic delivery of mankind’s adversity with nature.