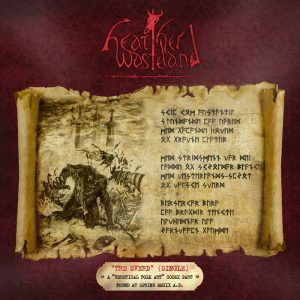 Heather Wasteland’s back catalogue had a tendency to curve towards what the band describes as “Heretical Folk Art”. The pre-Christian folk motifs are indeed reminiscent of the ethos of the early pioneers of Folk Metal like Moonsorrow. With regards to the single “Tre Sverd”, the tradition of good old fashioned heresy with layer upon layer of symbolism is back full force.

First off, a word about the artwork. The cover alone gives a distinct feel of that all too familiar pagan blend of the occult, with extensive use of runes, an ogham diagram, and even the mandatory shadowy monster representing destructive archetypes. Upon examination of the music itself, also a painstaking cultivation of the motifs of paganism as an art are revealed.

All of the tracks on the release are remixes and edits of the same track “Tre Sverd”. The titular song in all its versions are very ambient, highly melodic and employ operatic vocals. The lyrical content is highly symbolic in a way that sounds a bit like the songwriting off The White Goddess by Atlantean Kodex. Two potential drawbacks immediately evident with all versions of “Tre Sverd” is that the keyboards sound a bit too artificial in a few sections. All but one of the edits lack the spoken outro which add somewhat to the experience (but given that they are radio edits I don’t really blame them). Since the song has had at least moderate radio circulation based on the versions present on the album I need not describe the song in much further detail. However, I will say that the original version seems to be absent from the album, which might have added more to the fun of comparing the different versions.

The album has many variations on the title track which in this reviewer’s opinion elevates the value of the release beyond an ordinary single. Given the lyrical mode and the fact that the song is a ballad, all the versions have greatly increased replay value. But more importantly “Tre Sverd” does live up to its tagline as being Folk Art.