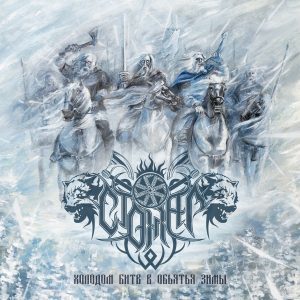 Before you go nuts translating this, it is the newest album from Stozhar (or could also be Stojar I believe) entitled “Cold Battles In The Arms Of Winter”….. more or less. Yes, they are Russian hailing from the Yaroslavi region and this would be their 4th full length for label Stygian Crypt. The album has 7 tracks at 46 minutes or so and seems to be all new tracks. One thing about them before you even listen, they consistently have had amazing artwork for their covers, and this just may be my album cover of the year. Formed in 2005, it appears they have varied between a 5 piece and a 4 piece and at face value could be interpreted as a straightforward pagan metal band. I think if you thought that, you would be missing out on some quality, diverse, catchy and pretty folky metal. It is definitely heavy but has enough folk instrumentation and varied vocals and styles to appeal to more listeners. I would think Grai would be first band I would compare them to but not really a strong comparative act…but if you mixed in some Varang Nord or maybe label mates Pereplut you could get some of that vibe. Surprisingly there is a lot of keyboard and programmed/folk instrumentation and they really drive the folkyness home. Add to that female vocals and heavier male vocals trading off with one another the Russian lyrics and this one really has a lot going for it. I jumped back into their older catalog (I have them all) and they really have had the same sound for the most part but this one has a more lively and tangible song writing, arrangement and feel about it. Don’t start thinking “sellout”….not even close. It is just straddling that line between heavy and catchy which is hard to achieve but they have done it on here. One other incredible aspect of this is despite longer than average track lengths (6+ minute average), the songs fly by with hardly a moment of boredom. I am probably underselling this album a little, but you will be that more satisfied when you listen. The mix/overall sound is better than average and some of the folk instruments do have a slightly “artificial” sound or maybe too prominent, but I still like it. A big surprise? On some level it could be perceived as one, but if you have been following them then probably not. Still an effort that could possibly wind up in my top albums of 2019 or pretty close. Great album.