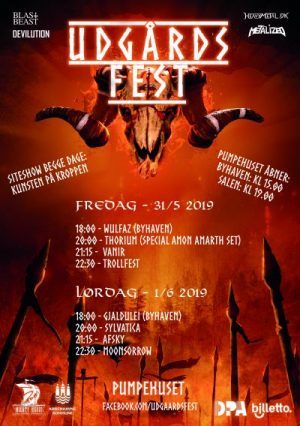 What is a semi American metalhead to do for their first Scandinavian holiday but to attend a festival in one of the most eclectic cities in the world? Udgårdsfest 2019 seeks to prolong itself as a two-day festival celebrating Viking-pagan-folk-metal music and ancient Nordic culture in the heart of Denmark’s capitol. Held in late spring at the world renown Pumpehauset, expectations ran high with headliners outrageous Trollfest on Friday and epic Moonsorrow, Saturday among relevant local favorites. The two-part venue, situated in the heart of Kobenhavn, comprises of a dual story concert hall with smaller downstairs and larger upstairs stages accompanied by an outdoor space. Aptly named Byhaven, this patio of sorts had tables, perch spots and stage entrances. Early festivalers could engage in summer merriment and refreshments, where openers Wulfaz and Gjaldulei set the mood with dinner scents encompassing patrons every night. Fans of Udgardsfest spanned generations, cultures and a variety of musical preferences evidenced by the many band shirts; some could also be seen in lavish traditional garb. We only had the pleasure of catching Vanir and Afsky of the opening acts, the first of which was great Viking ensemble and second, supremely atmospheric Black metal, which my husband quite favored. The first night Thorium also presented a fantastic Amon Amarath set. Despite not being a particular fan, we had fun boozing up in the ‘nosebleeds’, standing on the benches, adorned in the decorations of vine and twine. Speaking of, shouts out to local support and staff, we all know ultimately those are the people making the shows (second only to the musicians of course), who create and maintaining the ultimate memory for us.

The downstairs stage was a bit small and I was surprised Trollfest were assigned there, not to mention the technical difficulties they experienced coming on. None of this really mattered to me however, I was simply stoked for the experience, mere feet from my favorites. And what a delight they were! Stupendous pieces like the Toxic cover and Solskinnsmedisin delighted the audience as almost instantly, the intimacy of the small space grew on me and I was quickly within high-five’s reach of Fjernkontrollet. We were hurled through all the memorables relentlessly with many tracks off the new album sprinkled in. Fun, nonstop fun, three times, Fun! Is all I took from that first evening, besides the next day’s stiff neck. We explored as much of the city by electric boat as my stomach could muster, showing up nearly late for my interview, yikes! With the second day foreseeing a larger crowd, my focus diverted, quivering in anxiety. It’s difficult to discern the excitement from the physical pain my hangover really created leading up to the conversation with Ville and perhaps, we’ll eventually get to see exactly how much; this journalistic endeavor still new. With the hardest task of vacation completed mostly well, we were ready to party yet another late folk-metal night on the larger second floor, ever eager for a first time Danish showing of Moonsorrow! Being perfectly frank, I cannot remember another instance as transcendently emotional as that evening, spinning me further in love with their music.

We were initially graced with a couple tracks from Voimasta ja Kunniasta and immediately everyone broke out in hymns joining the masters, vocalizing not just the lyrics but even guitar and key melodies. Having never experienced longer tracks live, overwhelmed would be an understatement to my experience. There was laughter and at times there were tears, especially during Rauniolla and Jotunheim. Was it emotional culmination, the booze or the jetlag? We’ll never be sure, but I will not forget a second of it. Similar euphoria seemed mirrored by the tired but ecstatic crowd as we finally piled out after a 90-minute set, reveled in amazement. There are already talks of future years for this novice festival with plans of Viking face painting and other interactive activities to woo attendees further and there’s no telling who will headline.