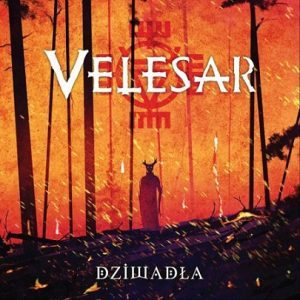 Depending on how well you know the Polish folk metal scene, the name Velesar may jump out at you on some level. The project takes its name from vocalist Marcin “Velesar” Wieczorek (formerly of Radogost) and is actually considered a solo project with backing musicians but really has a full-fledged band feel to me. The first release by Velesar is “Dziwadla” (“Freaks” or “Oddities”) and has a total of 13 tracks with almost an hour of music. Comparative acts? This was a tough one to pinpoint whether they have some bands with a similar vibe/style as I think they vary between Ensiferum, Korpiklaani and Grai at points or maybe a newer act like Siren’s Rain or I could even be reminded of the epic Utmarken. Ultimately, they have a very diverse sound which is not as much centered around Marcin’s vocals as one may think. In a short amount of time (formed in 2018) Velesar have gelled quickly as a cohesive unit and have put together a solid debut. Considering there are 7 members, this is quite a feat getting everyone on the same page. From a folk instrumentation perspective, they utilize flute and violin which blend in nicely either harmonizing or individually trading off riffs or going off on tangents. The traditional instrumentation (guitar, bass and drums) tends to act as a backdrop and driving force to the vocals (both Marcin’s and female vocalist), violin and flute. Even given the potential backdrop feel, the electrics and drumming shine throughout in guitar solos and breakdown parts. The tracks range from 2-6 minutes which feels right with their style and keeps the listening experience interesting. Lyrics are in Polish and give it that extra sense of authenticity. While Marcin may be the marquis member here, I don’t know if his vocals would have carried this project on it’s own….he has a great style but the combination with the female vocals is much better than if he was on his own. Overall, a decent sounding album as well with a solid mix and master with attention played to all performers with discernibility and heaviness balanced.  2019 has had some pretty strong debuts and Velesar is another added to the discussion for top ones for the year.