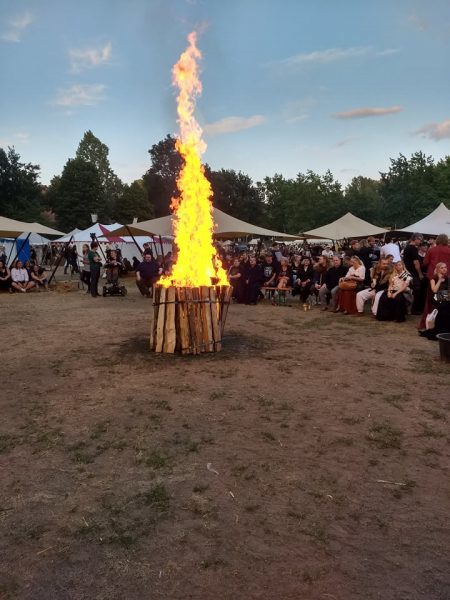 MPS, Mittelalterlich Phantasie Spectaculum or for the non German speaking people Medieval Fantasy Spectacle has settled down in the lovely village of Telgte in Germany. This event has become huge over the years, but many places are taken of the schedule due to several reasons. This event draws huge masses of nicely dressed people to their area, the popularity is huge. No need to draw people from outside the German borders to the festival. I love to come here, but when Borken was taken of the calendar, Telgte is the only one left, which is anywhere near the Dutch border.
Driving through Münster we entered Telgte, no signs of the MPS anywhere so we ended up in the middle of Telgte, among a row of cars seeking for the parking lot. Driving along the festival we eventually found the signs to the parking space in the fields just outside Telgte. Apparently they grow dust here 🙂 A short walk brought us to the festival are in the rustic townpark along the river Ems. The drought has taken it’s toll here as well. The grass has become brown, the paths are dusty, nature is having a hard time with two summers in a row with very little of even no rain.
But he festival feels like home immediately, the area is filled with stands, you can fill your belly everywhere with skillfully prepared food everywhere and the warm and dry weather doesn’t have to dry you out, beer, mead and other refreshments can be purchased everywhere. You can just relax, throw an axe, watch a band or a sword fighting demonstration, or whatever you want. You can do this is your daily clothes or in a nice outfit especially for these events. Do what you like, be what you like, that’s the motto of the MPS.

Besides the Cobblestones, the in Germany very polular Dutch Folk-band Rapalje, D’Artagnan and Saor Patrol, the Scottish band which is fundraising for the Medieval Village Duncarron, there are two band featured on Folk-metal.nl.
Cultus Ferox is the first one. There not doing their rockshow, but they’re performing their acoustic show several times during the day on the ‘grass’ near the main stage.
Dressed in medieval inspired steampunk outfits they blow their bagpipes and bang their drums, the music is immediately triggering your feet to move. Not easy to stand still to this beats. And the band gives a very nice show in the burning hot sun.

Versengold is a band which was founded way back in 2003. About ten years later they released their album ‘In Names des Folks’. This can be interpreted as In the Name of the People or In the Name of the Folk(music) and album which brought the band a growing popularity among the German Folk fans.
Their latest album is an album for the masses, but it will bring them even more fans. The band creates a crowd of thousands for the main stage and they’re all waving and singing along.

Saltatio Mortis is the favourite of many visitors of the MPS, many people are wearing their bandshirts this day.
Unlike we’re uses to the band isn’t doing their medieval show but their rockshow this weekend. This means little less bagpipes and the adding of guitars. I think many fans would think this is a great decision, personally I prefer the show with the pounding drums and thriving bagpipes.
Saltatio Mortis can pull them both off. And with a frontman like Alea they can bring the audience in ecstasy. The whole band is very skilled in putting down a nice show and showing the people some action. But Luzi has become a real audience-player as well. you don’t get a moment of rest with these guys, jumping, waving, you have to go on. And while the band is performing with high energy you feel like it too. In the middle of their 90 minutes set they have a little block of medieval songs with four bagpipes and no guitar and then they go on with their rockshow.
After 90 minutes they have to come back on stage of course and they treat the audience on ‘Früher war alles Besser’, ‘Prometheus’ and ‘Spielmannsschwur’.
And they could have went on for hours, the crowd couldn’t get enough of this band.

Unfortunately this weekend was the last one for the last time the MPS visited Telgte. Due to a conflict between the organizers and the town regarding the time the music has to stop in the evening the organisation has decided to skip Telgte for 2020.
I hope they come back in the future or find a nice alternative in the western region of Germany.
What a nice event, a real homecoming. I think I will be homesick for days.
Mittelalterlich Phantasie Spectaculum bye bye, until…..