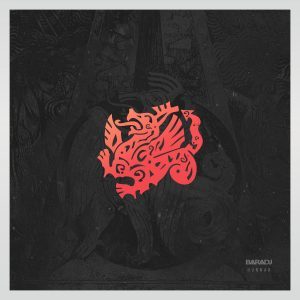 Baradj describe themselves as Post Folk Metal, which is about as accurate a description as I can think of for the unique sub-genre they have created. Whereas on earlier releases Baradj were more a straightforward progressive Folk / Metal band with prominent female vocals, on Hunnar they have taken a huge leap into Post Metal / Prog territory and, in my opinion, are better for it. The female vocals and jaunty, upbeat Folk melodies of old are nowhere to be found, replaced instead with a potent mix of brooding and atmospheric acoustic folk passages, Melodic Death Metal riffing and Post Black Metal ferocity. Gone are the days where you might have found yourself comparing Baradj to Dalriada. To my ears the 2019 version of the band have a sound something more akin to that you might imagine hearing from a supergroup comprising members of Agalloch, Opeth, Tengger Cavalry and even Tool.

What differentiates Baradj from the vast majority of their peers is the subtle and sparing use of the folk traditions of their native Tatarstan, with which they enhance their songs without overpowering them and without coming across as twee gimmickry. In that respect I suppose you could compare them in an ideological sense, if not a strictly musical one, to Romania’s Negura Bunget.

The musicianship on Hunnar is truly exceptional and the crisp, clean production really brings everything together in perfect synergy, while at the same time allowing each individual member of the band to shine, which is no mean feat.

Simply put, Hunnar is yet another stellar release in a year which has already seen its fair share of great albums. I can see myself having a hard time compiling my best of 2019 list as Baradj are going to be jostling with the likes of Waylander, Wormwood and Eluveitie for the top spot.