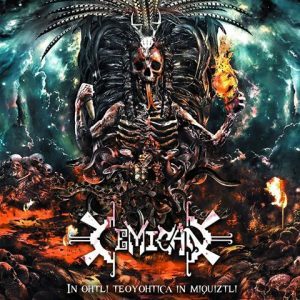 In numerous previous reviews I’ve done over the years of music from Central and South America, I have always had issue with the lack of traditional music and/or the quality of what has come from there. Are there amazing acts from this corner of the world? Of course! Vorgrum (one of my favs) and Skiltron come to mind but neither really embraces the music from their home countries. Thankfully, a band has FINALLY fused traditional music and contemporary styles rather successfully in the form of Mexico’s Cemican. Titled “In Ohtli Teoyohtica In Miquiztli” which I believe translates to “The Mystical Course Of Death” since it is in Nahuatl (language used in ancient times in Central and South America), and is their 3rd full length. Just from that alone they have gone beyond most other acts in delving into an old language as their lyric choice along with Spanish….positive point number one. It is also their 1st album for label M-Theory, home to our friends in the epic Helsott. Second positive point, they have gone all in on the concept from a presentation perspective with elaborate, traditional stage wear and personas, making for an even better impression. The album features 12 tracks at about 58 minutes of seemingly all new songs. After taking a listen to the old stuff again, I was reminded that they really seemed more like a death/thrash band on earlier releases without much of the traditional influences. Still cool but not really unique or differentiating in any way. Trying to think of a description I was reminded of something along the lines of classic bay area thrash like early Forbidden or Testament with the added layer of folk metal laid over it. With “In Ohtli….” Cemican still push that sound with more pre-Hispanic instrumentation which I would say are percussive in nature or various woodwind styles. Wisely, parts that would have most likely been guitar in defining the main riff has at times been switched with either whistle, flute or digeridoo style instruments. The vocals are of the typical black/death variety with some female mixed in with the real strong part of the vocal assault being the choral/group vocals. It is hard to describe the effect they create in the group vox department, but it is super haunting and impactful. There are a couple of interlude style pieces here (“Atemaxaque”, “Diosa De Todos Los Dioses”) which are nice breaks in the action. I think some may feel this is still a death metal album at heart with some folk thrown in. I can definitely hear that on some level with it still sounding like guitar is swapped out for the whistle, etc. but this is still a very successful album, far beyond anything I’ve come across. The overall sound does still have that midrangy sound that most thrash/death albums have, giving it that retro feel but I love that sound, so it is all good to me. The next time you need to tear a heart out for a human sacrifice, “In Ohtli…..” should be your obvious choice as the soundtrack, becoming easily one of the best fusing of Central/South American music with contemporary thrash/death metal in a long time….even to the level of Sepultura’s “Roots”….and that is saying something.