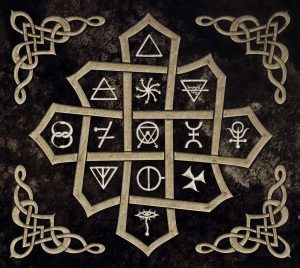 There are a lot of things that surprised me about the new release from E-an-na which started with the fact I even got a chance to review it. I thought for sure someone would have scooped it up before me. Secondly, despite numerous releases under their belt I believe I would officially call this a debut album (yes 2015’s “Jiana” is an EP) so another contender for debut of the year even though 5 years into their career. This collective from Romania play the upbeat, slightly off kilter, hyper speed at times type of folk metal I gravitate to most. For fans of Trollfest, Rogatiy Kolokol, Svartby, and Zmey Gorynich, you will definitely want to check this out but they have a well-rounded sound for many a folk metal fan. “Nesfârşite” (I’m going with “Endless”) is chock full of tunes weighing in at 64 minutes with its 13 tracks and appears to be an independent release. It looks like 2 previous released singles have made it on here….album opener “Viu” and the electric version of “Epitaf” (it has also been released as an acoustic version which I love). While I listed a slew of bands already as quick comparables, when you delve in, I think the two really closest bands would be classic Equilibrium mixed with some of the hardcore folk influenced acts like Cruadalach. There is a combination of the speedy stuff as well as breakdowns galore by this troupe of 7 from Sibiu and if this just a debut, then the sky is the limit for them. Start a list of all the things that make for a great folk metal release and they are on here….folk instrumentation, upbeat riffing, male and female vocals, keyboard arrangements, punchy bass and drums…yep, all here. Tracks are in their native Romanian so lots of authenticity and they blend traditional instrumentation and melodies into the mix. While I tend to think of AnTheos as being the name in Romanian folk metal, E-an-na is right there with them with this release. Favorite track(s)? I love the cabaret stylings of “Pielea”, the groove and grit in “Pânda” which has a real swampy feel and the star filled “În Frânt” which features Michalina Malisz of the always epic Eluveitie and bagpiper Archy Jay. There are also 2 tracks featuring vocalist Daniel Neagoe of too many projects to name and 1 features Robert Cotoros on guitar (presumably) of the band Hteththemeth (yes, I spelled it right). Sound quality is lively and feels right for everything going on here. I would say if I had one criticism, I think a shorter album may have made this album stronger. Kudos for tons of amazing songs but it is a long listen and maybe an album length closer to 45 minutes could have made for the old “less is more” phrase I like to use on occasion. This is a band I see being a major folk metal player on the horizon as long as they stay the course and pick up some momentum on the touring front. Great debut.