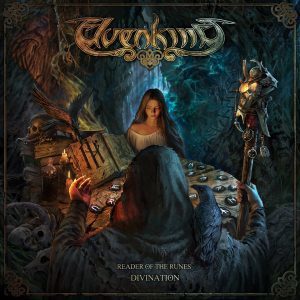 For objectivity’s sake I will only be summarizing the general tone of Elvenking’s new album, in addition to the good and the bad. Before I start a bit of background: my first exposure to Elvenking’s music was with one of their very angsty and melodramatically emotional music videos. The band’s sound has felt more like some melodic or symphonic metal that takes an almost emo approach to their lyrics. Vocals are as important to me as the music and can make or break a song or at least strongly influence my opinion. However, I do not dislike their music. In fact, Elvenking was the first band that introduced violin to me in a Metal context and some of their music is more aggressive than most of the Power Metal bands in their region.

As for the album itself, I have good news for fans of Elvenking, for the most part the band are sticking to their guns, and have kept their more successful formulas unaltered on most of the album. In spite of that, the first few songs of the album showed some interesting potential. For example, when I heard the song after the opening instrumental I was completely awe-struck. The first three songs take Rhapsody’s virtuosity, Stormwarrior’s intensity, and a strong vocal effort with an energy worthy of Sabaton. It felt uplifting, it felt Powerful – like the genre is supposed to be. Sadly, the rest of the album did not develop this approach any further and with the shift in tone there was also a shift in lyrics.

It is with the fourth track, entitled “The Misfortune of Virtue” that the lyrical issues start. The song rails on about Christianity’s hostility against the pagans of early Europe, or at least, probably intends to. Apparently they thought reciting tenets of the Christian faith is enough to provide commentary on it.

One other problem with the lyrics (which also extends to the music itself) is the track “Eternal Eleanor”. Like the name suggests, the song is a somewhat cheesy love song and little more than filler. In terms of the lyrics I will simply say the extent of originality here is substituting the word “Vampire” for something overused like “Saccubis” in the context of a love song.

While the rest of the album did shift to Elvenking’s more emotionally driven lyrics and obsession with melancholic minor-key melodies there are some interesting developments. Alternative rock influences are apparent in some songs like “Under the Sign of the Black Star”. There is a thrash-worthy breakdown on the closing track “Reader of the Runes” which also veers very heavily towards the folk side of music. Since Reader of the Runes is an Elvenking release, people already know what to expect. There is a wider range of influences than their works I’m familiar with which is a double edged sword in terms of the undeveloped potential that they sacrificed for their usual sound. For an attempt at a serious concept album there is slightly more development of a noticeable overarching story than other Italian groups like Rhapsody and possibly Ancient Bards. Reader of the Runes will be great for fans, decent for teenagers with dyed-fringes, and an okay album otherwise.