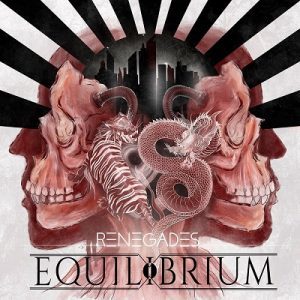 On August 23th the much anticipated new album of Equilibrium is released. Folkmetal.nl had the honour of being able to listen to it in advance. When one of your favourite bands releases a new album, you live between fear and hope. Especially when the band announces that the album is rather different than their previous work. And not just saying it’s their loudest or best album. No, they actually made a few changes in their lineup. So will this be an evolution or a revolution? Well, I would say a rather big step in evolution.

Bass player Makki is replaced by Skar, an experienced artist, whose clean sung parts are one of the major changes in the arsenal of the band. The arrival of key board player Skadi is a minor change, since Equilibrium have never made it a secret that keyboards are used. Maybe she will make a difference in the stage appearance, though. Been a while since Sandra and Jen added a feminine touch. Another change is that more and more songs are sung in English. Not all the fans are keen on the band not using their native language. That’s not only a matter of preference. It is also a fact that Robse’s pronunciation of the English language is mediocre at best. Time to stop guessing what these changes will lead to, and start to listen to the music.

The album kicks off with first single ‘Renegades – A lost generation’, which was already presented online. Rather in the style of Armageddon, meaning up tempo pagan metal. Harsh and yet somehow easy for the ear. Not many fans of the old work will be put off yet. Second song ‘Tornado’ just might. Here for the first time the clean vocals of Skar are used. Let’s be honest, in the beginning this is a bit of a shock. Pagan metal with clean vocals? Male clean vocals, to be more precise? Where are the certainties of life? When you are over this initial shock and listen to the song, and in fact the entire album again and again, you must admit that Skar is in fact a genuinely good rock singer. So what if the rules of pagan metal do not apply entirely? Isn’t rock and roll about rebellion instead of following the easy path? I admire a band that does not stand still. It takes guts to make adjustments when you are successful in the way you’ve done things so far.

And it gets even more adventurous. ‘Path of destiny’ contains a piece of rap metal, performed by The Butcher Sisters. Funnily it fits within the structure of the song perfectly. On a sort of hardcore rhythm a few lines are sung / spoken. Skar’s clean voice takes over again in this 3 ½ minute song. Where fans that only like the albums up to Sagas may leave the fan club, I am sure new followers will be attracted. Yes, it’s different and less true to the confinements of the niche that is pagan folk metal. Also yes, it’s still quality music. The more I listen to the album, the more I like it. Not as much as Sagas, but better than Armageddon.

Some minor flaws must be mentioned. Mostly some parts are really too simple to be interesting. The chorus on ‘Moonlight’ for instance, not a fan of. Another difficulty in the writing is that, when you are accustomed to write lyrics in your own language most of your life, it’s just hard to adjust to another language. Here and there it results in rather plain rhyme. On the other hand, the songs are catchy as hell, still pretty aggressive and Robse’s growls are deeper and more menacing than ever.

For everyone with an open mind, listen to the album more than once. Appreciate it as a metal album. Not just as a piece of pagan metal or as a album from the band that brought us ‘Blut im Auge’. But as an album on its own. I think it will grow on you as it did on me. For me, this is the end of the road as a writer for Folk-metal.nl. I have loved doing this for the past four years. Time to move on and focus even more on family, work, sports and other aspects of life. Thanks for having me around. See you in the pit!