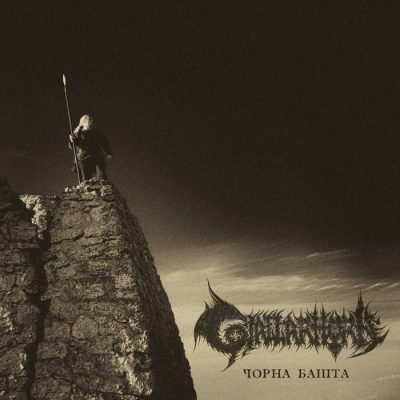 It has been some time since we had a Gjallarhorn release for review here….and that includes one that we did not see come by our digital desks (2015’s “The Path To Eternity” EP) so all the way back to the killer split with Ravnkald and Fjörd from around the same time. Now in 2019, they have issued a new EP containing 4 tracks at around 20 minutes and I feel that this has some groundbreaking potential for what they have done here….read on. Entitled “The Black Tower”, the 4 tracks are all based around a singular concept and all titled as such…. (“The Black Tower I, II, III, IV”). The inspiration is the poem titled the same by Irish poet W.B Yeats with lyrics taken more or less from the poem and sung in their native Ukrainian. Groundbreaking? Why this grabbed me was the fact that it is a concept piece but not an entire album worth and is much stronger for doing it this way….thus the concept EP may have just been created. I could make the argument that this is really just a 20-minute track broken into 4 sections but let’s not get picky. Now I am still not a fan of the intro instrumental (“Black Tower I”) but at 4 plus minutes it works in the entirety of the whole release. The tracks I feel are slightly more progressive/less pagan than earlier material but no less heavy with plenty of blast beats, heavy riffs and brooding vocals. This to me is a sign of major maturation and being more inclined to pursue stronger tracks and not feel obligated to just go for speed. On some level I was reminded a lot of Heidevolk blended with some classic old school black metal like Satyricon and Enslaved. I suppose a Nokturnal Mortum comparison does work at points as well but nowhere close to being as folk influenced. However, this just does seem like a natural progression for what they have done previously but have just done even more so here. I believe the mix and production also play a role in the overall vibrancy of this release, being less veiled and more polished, giving it that clarity and heaviness needed. The EP has seen a viable comeback this year with strong efforts by Achsar, Wolcensmen and Goblin Hovel and whether or not we will have a “Best EP” list at the end of the year remains to be seen. If so, then I certainly think that “The Black Tower” will be on it for me. Great EP.