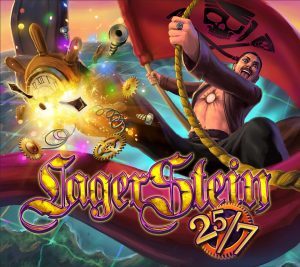 Before we go any further, I’m going to address the kraken in the room – Aussies, Lagerstein are obviously influenced by Scottish Pirate Metaller heroes, Alestorm. Ok, now that’s out of the way, on with the review.

While they are not likely to escape comparisons with the aforementioned Pirate Metal legends any time soon, Lagerstein differ from said band in a couple of important ways: Firstly, they fully embrace the pirate gimmick, both on record and in their live performances and secondly, vocalist Captain Gregarrr doesn’t affect a faux-pirate rasping vocal style, opting instead to use his distinctive and not half bad, clean singing voice with occasional gruff spoken parts. The most striking thing for me though, other than the excellent production work (courtesy of the brilliant Fredrik Nordström), is the noticeable improvement in both the song writing and the playing, when compared to previous releases.

If you are even remotely familiar with the Pirate Metal sub-genre, you are unlikely to be too surprised by 25/7, with songs like Dig, Bury, Drink!, Wild West, Drink of the Pirates and The Shoey Song ticking pretty much every box lyrically (rum, pirates, drinking) and musically, with Wild West, especially sounding for all the world like a long lost bonus track from Alestorm’s Black Sails at Midnight album. Not that this is a bad thing. At all. Don’t get complacent though as Lagerstein are still capable of throwing the listener a curveball or two. Take the songs Pina Colada Paradise and Wench My Thirst, for example, Pina… with its pseudo Reggae groove, complete with steel drums and Wench… with its tongue firmly lodged in its 80s pop / rock cheek. The choruses are annoyingly catchy and are likely to be stuck in your head for days. Of course, it’s all wonderfully and knowingly silly and that is a big part of its charm. These lads are clearly having the time of their lives and this really shines through on 25/7.

It will never be lauded as a classic, and rightly so, but 25/7 is a fun and ludicrous party metal album, which will brighten up your day and bring a smile to the face of even the dourest metalhead. ​

On a separate but related note, if you haven’t seen them live yet, you’re really missing out. Grab a ticket next time they pass through (or near) your town.