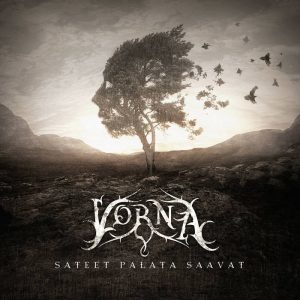 An enormous responsibility with this gig is catching and calling out genres, so to initiate this review appropriately, I would call Vorna Nu Vintage Black Metal and Sateet Palata Saavat (Rainfall Returns) is their third full length release. Seemingly these folks have gotten into a bit of a groove with the music thing resulting in some not too shabby results. I enjoyed this album for the same reasons I enjoyed the previous two albums; straightforward mix of acoustic folk with melodic riffing. No bells, no whistles. As a whole, Vorna tend to evoke a slight nostalgia towards the old but not forgotten Dimmu and DT albums circa 199x, with foregrounded piano and guitar tunes well supported by a distinctively redeeming bass. This third attempt is no different.

We sadly start out with a rather dull intro, apparently to set the mood that mostly comes across as just a clever way to elongate the album. A couple outstanding tracks would be Syvyydet, Maa Martona Makaa and an emotion closer with Sateet, the singles, the rest often difficult to remember. Overall, it is a consistent, easy listening album with many strong features like beautiful and harsh varied vocals, clean guitars and keys, diverse rhythms from slower to upbeat and a stellar production, however insufficient to complete with a few monstrous releases of 2019 so far.

Has this issue plagued them throughout persistent quality releases? Maybe it is why Vorna have slipped past most radars for the duration of their roughly 10-year tenure. Initially and unfortunately, I made the mistake of over-listening, which quickly wore me out from Vorna, driving me towards a 2-week hiatus. Still, Sateet Palata Saavat is a worthwhile listen, recommended in moderation to not ruin the nuance.