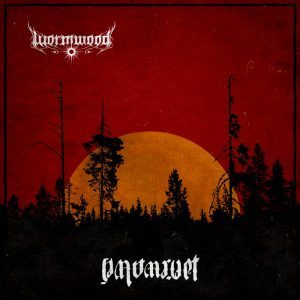 If you have heard Wormwood’s brilliant debut album, Ghostlands, and are expecting more of the same, Nattarvet is going to be a very pleasant surprise indeed. Whilst the band’s core sound hasn’t changed dramatically, it has noticeably evolved and the new songs are not merely longer than before but are also more doomy and melancholic in tone. Simply put, Wormwood have taken the foundation they laid on Ghostlands, and have built on it to create a towering, shimmering edifice of Melodic Black Metal excellence.​

Av Lie och Börda is a solid mid-paced opener which sets the tone nicely for what is to follow with its chugging riff and Folky undertones. Next up is “I Bottenlös Ävja” which at just 5:39 is the shortest track on the album, but at the same time one of the most interesting with its atmospheric, Folk heavy sound. Don’t let yourself become complacent at this point though, as Arctic Light follows with its suitably bleak and sweeping post Black Metal guitars and harsh vocals, reminiscent of bands such as Harakiri for the Sky or Agalloch. Incidentally, this is the standout track on the album for me and is the closest thing to straight up Black Metal as you’ll find on the album. The rest of the album follows in a similar vein, until we come to album closer, The Isolationist which at 11:50 is by far the longest and most sprawling song the band has recorded to date and once again brings to mind the likes of the mighty (and sadly defunct) Agalloch. Quite simply, an epic and majestic way to round off a near perfect album.

Wormwood have taken their musical influences and have blended them together to craft a unique sound which they have then embellished further with distinctly somber and sorrowful Swedish folk melodies to create a style which is all their own. All this makes Nattarvet an album of sublime beauty and quite frankly, there aren’t enough adjectives in the English language to describe just how good it is, so I’ll just use one: Spectacular! Don’t be surprised to find this album topping the best of 2019 lists come December.

Recommended for fans of: Agalloch, Moonsorrow, Thyrfing, Bathory, Harakiri for the Sky.