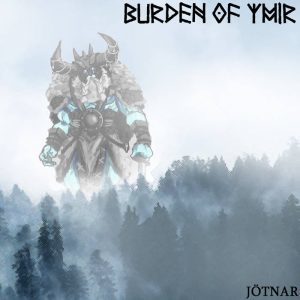 If you peruse Bandcamp like I do, I am relatively certain you have stumbled across Canada’s Burden Of Ymir in your travels….especially if you are looking for music tagged with “Viking” (Ymir is the first giant in Norse mythology).  If not familiar, then you will get a chance to listen to the first full length issued by them in the form of “Jötnar” which is comprised of 10 tracks totaling 37 minutes or so. The album has officially been out since July, but we are just getting it for review.  Up to this point, Burden Of Ymir have issued 3 EP’s and I was surprised that they are all from this year….very productive output. Dr. Joseph M. Caswell is the individual behind everything you hear in the tracks which are all instrumental as are all of the previous EP’s.  Instrumental? Indeed. So, that will be the first hurdle to pass is if you can get into an instrumental album. I tend to like instrumental albums (DS, Soundtracks, etc) so definitely in my wheelhouse. Now, if you are thinking it will be like Amon Amarth or Bathory without vocals then think again. There is a mixed bag of styles here which could be in the realm of them at some points, but I think our friends in Varang Nord or Baldrs Draumar (yes, lots of some accordion style instrumentation) mixed with some Ensiferum, Draugul and possibly Skjaldborg maybe be better comparisons. While the track titles are overtly Viking in nature, I feel that the tracks really don’t have that perceived Viking sound in either the more death metal oriented or folkier/traditional styles. This is where I feel that having a vocalist would define the tracks more and give them a better direction and I believe, would make them more “generic” folk metal than strictly Viking. However, as the tracks stand, they are an enjoyable to listen to and the project as a whole is promising. There is an ample amount of instrumentation, blast beats and tempo changes to not be stagnant and the riffing is catchy, so I think Dr. Caswell has got some chops. To address the elephant in the room, this project is screaming (pun intended) for a vocalist whether he gives it a shot or finds one to act as a role player. Favorite tracks? Definitely the longer ones (“Because Þrymr Looted The Hammer”, “By Surtr’s Shining Blade” “Thus Came Skaði With Bow Held High”) where there are refined ideas and a more fulfilling arrangement. The overall sound is quite good here as well with everything clear and discernable. I know I have already beaten it to death, but a vocalist would definitely make this a more memorable and exciting listen. For now, we can enjoy Dr. Caswell’s musical endeavor as a pretty decent instrumental project.