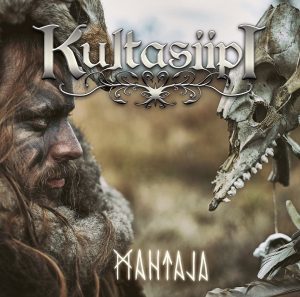 Kultasiipi are marketed as Germany’s most Finnish Folk Metal band, but, in all honesty, while they certainly channel the musical egregore of all the big names from Finland there remains something fundamentally German about their music. Or to put it another way, at its’ core the music that doesn’t directly recycle old Finntroll and Korpiklaani elements sound significantly like the German Folk Metal bands Clanrock and Minotaurus. With their varied influences Kultasiipi have avoided the all-too familiar stigma of “Finntroll worship” or “recycled Korpiklaani” riffs that I have seen thrown at bands that dare to draw inspiration from those two big names. However, unlike some of the bands I’ve reviewed that spread themselves too thin across the musical spectrum Kulasiipi have kept a consistent enough sound across the entire album.
Moving onto the album itself, I have to admit Mahtaja may the most profusely packed EP I have ever seen, but therein lies the first issue. There is just over 35 minutes of runtime across twelve tracks, of which 6 are either atmospheric or thematic filler spanning under a minute each. There are some albums where the filler distracts from and sometimes even interferes with the coherence of the music (a certain Manowar album comes to mind). But here the songs are short enough to not affect the album negatively at all. The issue with the filler on this album is that all of them have a vastly different tone from the songs also present. Interludes vary in tone from ethereal and almost eerie to sounding like that creepy theme park vibe Finntroll has going on in their instrumentals (Try to deny it). Overall the fillers are okay in that they don’t sound bad but the effect still switches up the sound abruptly.
Secondly, the music itself must be addressed. As I’ve mentioned in the intro there is a strong undertone of German rock music. Strangely enough the more a song leans towards rock than Metal, the more original it sounds. Metal influenced sounds like the title track and “Tulen sanat” shows why this is true, with the former tracks repetitive, recycled riffs and with the latter’s dynamic flutes contrasting with similar monotonous riffing. There is a very energetic delivery which offsets any boredom one might feel, and that may simply be because the band took so many cues from the Korpiklaani, who have the same type of bounce to their music. One or two of the more Metal leaning songs feel like they took the hummpa approach of the Finnish greats and just added some rock rhythms to it. The main triumph with the heavier songs on Mahtaja was ironically when all other elements were dropped and the Metal was taken to a very abrasive extreme on the track “Metsänpalosanat”. The remaining tracks are fairly standard German rock with one Finnish folk song added in.
The last aspect of the album I want to cover is the vocal element. Instead of just one type of vocals or the common harsh and clean, there seem to be three types of voices going on at different parts of a given song: Harsh vocals that sound like a Finntroll clone, the default projected Viking Metal baritone, and the eerie banshee soprano akin to some circles of Celtic Rock. While it is mostly the Metal leaning songs using this trinity it gives the songs a somewhat more creative feel.
Overall Mahtaja is another fairly eclectic album. There is undeniably a lot of derivative Folk Metal on here but it doesn’t feel like the album is just another rehash of ideas. In fact, certain detractors of Finntroll may be pleased to hear no keyboards were involved in the making of this album (I’m sure the same people will go on about the flutes though). As I’ve mentioned the album has heavy roots in rock music in addition to Metal which are arguably done better than the Metal aspects of the album. In the end like all music done by German Metal bands who dress like they will be playing at a renaissance faire, the Folk Metal performed here is energetic, catchy, and as fun as Folk music can get.