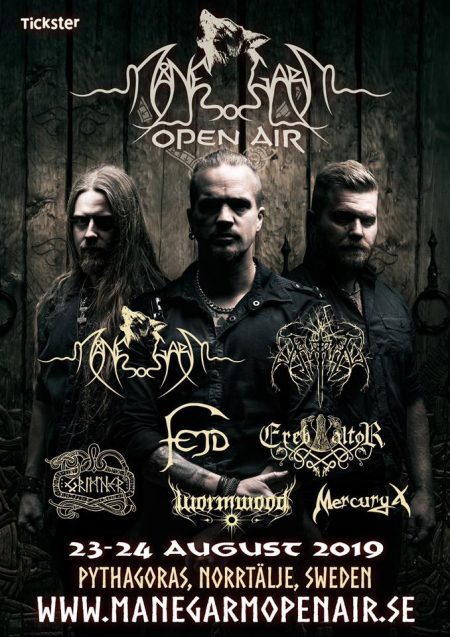 From the moment I woke up on Saturday 24th August, the omens were good for the inaugural Månegarm Open Air festival, held in the headliner’s hometown of Norrtälje in Sweden and with a lineup featuring a veritable who’s who of Swedish Folk Metal. The sun was shining on an unseasonably warm day and the festival was now sold-out! On arrival, I was immediately charmed by the picturesque setting of the festival area, which was set up in the courtyard of a quaint Industrial Museum, complete with the prerequisite (traditional Swedish) red wooden buildings. The first thing I did on arrival was to have a look at the food and drink menus, which turned out to be disappointingly mediocre, with just one available vegetarian (and no vegan) option and the only beer on offer was a generic lager. Let’s hope due to the success of this year’s festival, the band will expand the selection in future to include maybe a decent real ale and possibly even mead. But this is a minor quibble as the facilities on offer were otherwise above and beyond what could have been expected for a festival of this size.​

The band with the unenviable task of opening proceedings was local act, Mercury X (6/10) who feature in their ranks one Martin B who has been playing with Månegarm as live guitarist / violinist for a few years now. As competent as they are, they are little more than a fairly average Prog Metal band and seemed very much out of place on this lineup. A few sound gripes aside, though, they were a decent, if unremarkable, opening act.

Next up were the massively hyped and hugely anticipated Wormwood (9/10). The sense of anticipation in the crowd for Black Metal’s newest darlings was palpable and despite hitting the stage a full 10 minutes late due to some unfortunate technical issues with the drum sound, Wormwood were welcomed as heroes by the crowd. There were some occasions when the vocals got lost in the mix, but this small issue aside, Wormwood delivered the goods and got the festival going properly. The set was a nice mix of old and new, with the goosebump inducing newer songs working especially well in the live setting and creating an atmosphere of cold menace, even on a hot summer day and in broad daylight, which is a feat indeed.​

With their upbeat and bouncy songs, face paint and stage clothes, Grimner (9/10) are the first band of the day to play the more obvious and fun type of Folk Metal that many people expect from the genre and this made them stand out from their peers today. The set was a near-perfect “greatest hits” collection including the obligatory Eldhjärta, Midgård Brinner and crowd favourite, En Fallen Jätte. The band were personable, funny and talkative, with plenty of crowd interaction. Grimner’s music isn’t complex or clever, rather it is jaunty, jolly and fun and judging by the reaction and size of the crowd, they should have been placed higher up the bill.​ If you were to close your eyes and try to think of the absolute antithesis of Grimner, then you might well conjure up the image of…

Ereb Altor (8/10) drags the mood of the crowd violently back down again, in a good way you understand. Gone are the jokes, the gimmicks and the bouncy anthems. In their place, a brutal blend of atmospheric black and doom metal telling dark tales of Norse mythology and of blood and sacrifice. Always a consummate live act, Ereb Altor don’t disappoint with a fantastic set comprising of a well-balanced mix of old and new material.​ After the now familiar half hour changeover period.

Fejd (7/10) come on stage to a noticeably thinned-out crowd. As the most authentic Folk-based band on the lineup, they are more of an acquired taste as they lack the heaviness of most of their peers. That said, their use of traditional instruments and their infectious tunes makes them an interesting and engaging live band who easily won over the crowd and got one of the most enthusiastic responses of the day.​

Suitably, by the time Thyrfing (9/10) hit the stage, the warm, bright summer day had given way to the dusk and the chill of a late Summer evening. Thyrfing’s live performance is ritualistic in feel, with the band appearing hooded, the exception being vocalist, Jens who stalks the stage menacingly, pounding his arms in time with the drums and working up the crowd like a demented ringmaster. Thyrfing are relentless and don’t let up for a moment as they pummel the crowd into submission with a setlist which leans heavily towards the band’s more recent and darker output. It would have been nice to hear some older material, but with such a short set, it would have been impossible to please everybody.​ With the crowd suitably warmed up and well-lubricated with beer, it’s time for the headliners and hometown heroes.

Månegarm​ (9/10) are to close proceedings, With songs from their latest album, Fornaldarsagor rubbing shoulders with select highlights from the band’s impressive back catalogue, it would have been hard to compile a more complete and well-rounded setlist. The band were clearly on cloud nine playing a sold-out hometown show and this, combined with the energy and enthusiasm of a very appreciative crowd, made this live show feel very special indeed. As the performance came to an end with traditional show closer, Hemfärd, a glance around the audience of smiling and exhausted faces confirmed what I knew already, that this was a momentous moment for everyone in attendance. Here’s looking forward to the next installment. See you there!