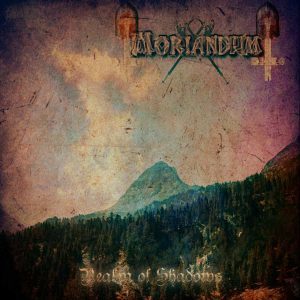 Am I the resident black metal guy here? Not sure, but I think I am probably the Tolkien black metal guy and even the Dungeon Synth guy (I have a DS project I do haha). Whatever extreme music configuration I’m in, Sweden’s Moriandum crosses into a bunch of them for me and does so with 2 impressive full-length debut albums. Yes, I said 2 full length albums basically released within a few days of each other in August with “Realm Of Shadows” and “Stronghold Of Evil”. This appears to be a one-man project started this year by a single artist named “T” who also has another project called Ödeland (which is also something I could see us reviewing at some point). Just by name alone you can infer a strong Tolkien aesthetic to the tracks (Moria are the mines under the Misty Mountains in Lord of The Rings) and you would be pretty much right but there are some other twists in here as well. If you say “Tolkien” in genre tagging any band, I am immediately going to start with comparisons to the masters such as Summoning, Duskmourn, Dwarrowdelf and Battlelore amongst others and Moriandum falls somewhere in the middle of all of them. I would also say there is a classic black metal sound in there with Bathory and Dissection coming to mind as well employing memorable riffs with enough blast beats and distortion to give it an old school feel. The albums combined are over 76 minutes of tunes in their 19 total tracks with a blend of multiple music interludes and gloomy tracks. I think while the LOTR vibe is there, Moriandum may be sold way short of the overall appeal of the releases as they are much more varied and not so specific to the genre they have placed themselves in. In all actuality, only a few tracks have a defined connection to Tolkien black metal by title (“Moria”, “Rise Of Mordor”, “Beneath The Misty Mountains”, “Ephel Duath”) while the rest could be considered more straightforward black metal. Tons of mid paced tracks with solid, catchy riffs here as well……”The Great Hunt”, “The Ruler”, “Foundation Of Wrath” and “Eternal Grief” were amongst the more memorable tracks for me, giving me a major Mithotyn flashback at points. The overall sound and feel has a lot going for it…….drums are slightly subdued but work in the general sound with a retro/analog sound to it but still has enough detail to make everything listenable. The mysterious “T” has a well-rounded musical background and seems to be able to jump in to all aspects of the project without needing outside help…..I wonder if this is someone we know in another Swedish act? No, I have no inside information but it wouldn’t surprise me if it is a musician we all know. For now, let us keep the mystery alive and just enjoy the 2 great album of solid black metal with some LOTR influences…..