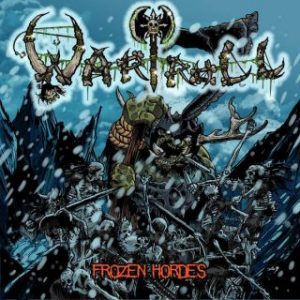 Among many firsts of writing reviews for Folk-Metal.nl, this marks my first local band! WarTroll is a quartet outfit from practically my backyard of East Foothills in the San Francisco Bay Area, beautiful, sunny California and Frozen Hordes is their sophomore independent effort. First impressions allude to Trollish thrashy deathcore and what a treat it is to comprehend lyrics which are eloquent, rhythmic and on theme.
We’re greeted with an objective Frozen Hordes intro, setting the appropriate tone that transitions straight into Oathstone with some of the most impressive time signatures of the record as well as my favorite lyrical passage. Next, I was almost fooled by the downtempo opening as breakneck tempos, raucous riffs, and voracious vocals of Ice Mammoth stomp through an icy 8-minute flurry. Backing synths grace this and I believe, all the tracks for atmospheric completeness and once staleness approaches dangerously close, we welcome an instrumental ballad in Sorrow to mix things up. Then, unequivocally anticipated from self-proclaimed “trollmetallers”, we transition into a party track with Meadhall Mishap. Valkyria follows with essence of a mid-tempo battle track prominently outlined with a leading melody and hymns reminiscent of many Viking giants’. Death March blasts in with the exact brutality required for such a title and is where we experience the heaviest vocal lines of the album. Silver Tower chorus takes me back to my AFI and Guttermouth days for some reason. Finally, Foehammer reminisces of Leshak’s sinister tricks, a worthy closer to an outstanding album. For the less cheery aspects, I am regretfully partial to the battle sounds throughout. On one hand, they teleport the listener right onto the battleground as if hired entertainment intended to upkeep the combative mood. Yet, in numerous instances they become distracting whenever constant in song passages.
Comparison between the band’s two albums, presents noticeable improvements from the debut evident in production quality, instrumental and vocal delivery and album artwork. Though both are a fun listen, this latest expands compositionally and showcases each member’s musical mastery. And however, juxtaposed the WarTroll style is between the environment in which was bread, there is no mistaking what an obviously killer release Frozen Hordes is. Now to catch them live!