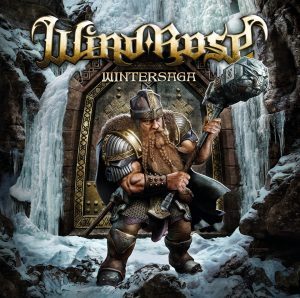 As a genre, Power Metal has had a long history of detractors and critics. Even among the most vocal of these individuals there is usually the understanding that Power Metal is tailored around being fun. The elaborate guitar work, the sometimes poppy major key melodies, the upbeat lyrics – it all ties back in some way or another to an atmosphere that is just plain fun. Wind Rose play an interesting blend of Power and Folk Metal that is heavily inspired by fantasy tropes surrounding dwarves. For those unfamiliar with stuff like Dungeons and Dragons, Dwarves are usually short, burly, bearded heavy-drinking warriors with axe fetishes, and quick tempers. The idea of bringing dwarves into Metal is down-right artistic on paper but how well does that translate into practice?

Well, the period leading up to the release of ‘Wintersaga‘ saw the release of three singles. “Diggy Diggy Hole” is the first of these, it is interesting in that the song is a cover of a somewhat famous song released by YouTube gaming giants, Yogscast. “Diggy Diggy Hole” itself is an anthemic parody of various fantasy stereotypes. The song is catchy, delivered with energy, for lack of a better word it’s fun. Following their cover song was the release of “Drunken Dwarves” the music for which looks like a PG version of “Trollhammeren” (PG, but still epic). Like the tongue in cheek charm of the music video, “Drunken Dwarves” easily represents all the drinking and partying permeates modern Folk Metal. From all these singles “Wintersaga” stands out, sounding more like conventional symphonic sounding Power Metal being epic. By no means is “Wintersaga” a bad song, the bar was just set high, and the rest of the material that preceded it stand out.

Inconsistency is perhaps the only real issue with ‘Wintersaga‘, on multiple levels. There are the songs that have their exuberant Power, like “Mine Mine Mine” and to a lesser extent “The King Under the Mountain”. Remaining tracks sound more like your usual epic Power Metal with symphonic influences bordering on the orchestral. While the other songs aren’t bad they just don’t reach the level established by the other tracks. In terms of being a concept album there is also a lack of consistency. Is ‘Wintersaga’ a field guide to the culture of Dwarves, or is it about the ascension of a new ruler? One might argue that the album covers both, which it does do fairly well, however it feels like the dynastic change was meant to be the focus.

Judged individually from Wind Rose’s other efforts ‘Wintersaga’ is an opus of varying quality. All the songs are good, but there is a sharp contrast in how good each song is. Here the final verdict is determined more by the judging all songs by the merits of the best songs, which sadly overshadow the rest of the tracks regardless of quality. Do not however, overlook this album. When the album goes big  you find yourself in a mountain fortress, and when it gets fun its happy hour at the mead hall at Erebor.