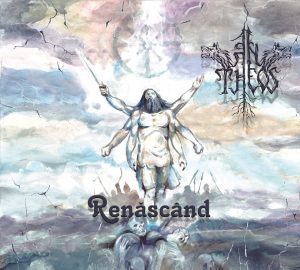 I have been on a hot streak when it comes to reviewing releases from the epic An Theos. First, their debut (“Semintia Daca”) in 2016 and the follow up (“Spre Cer”) in 2017. Now 2019 brings us full length album #3 in “Renăscând” (google translate says “re-enacting” but I am going to guess “re-emergence” or “re-animated”) which is still going out as an independent release. There is a total of 10 songs totaling 51 minutes of all new tuneage including 1 cover track. In previous reviews, I compared this 8 member troupe from Bucharest with bands that are more on the upbeat side of folk metal…. Distoriam, Kanseil, Boisson Divine…. and I feel on this release they have gone a little darker and may not have the same comparative acts. The components are still there, primary music (male/female vox, guitar, bass, keys, drums) with folk instrumentation (violin, mouth harp, tulnic) but altogether the tempos are slower for the most part and the previously mentioned slightly gloomier vibe is noticeable at least to me. I was thinking a lot of the last couple of Korpiklaani releases while listening so no problems there. Vocally, I feel that Loredana has a much larger role this time around and that could be one reason for a change in sound but don’t worry……Florin still has a huge presence balancing with the dark growls. I’m not sure if this is the right word but they may be more “symphonic” now without necessarily being so. The arrangements and tempos overall just have a more mature feeling to them. There are a couple of facemelters on here (“Pierdut”, “Renăscând” “Alean”) which I think are more akin to their earlier material. The tracks are still in Romanian which really drives the authenticity home and make English lyrics a non-issue. However, we do get to hear them tackle a track sung in English with the epic cover of “Ride On” by the masters in Cruachan. What I really appreciated about the cover is even though the arrangement is pretty close to the original, the song sounds completely new. The track is slightly more up tempo than the original and the different instrumentation breathes new life into it. The sound quality is decent throughout the album as well, still having a raw edge to it while still maintaining integrity across the board in clarity and spatiality. I feel this album has a wider appeal to the older/original fan base while adding in some newer touches to gain some new ones. I would definitely say they are consistent in terms of quality music. While I hinted that E-an-na may be vying for the Romanian folk metal crown, I still think that An Theos sits on top as being the best export from there. Good album.