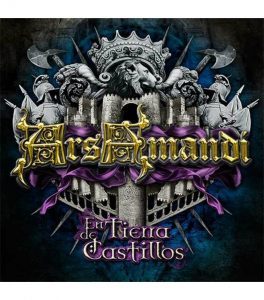 ‘En Tierra de Castillos’ is the new album of the Spanish Heavy / Folk Rock/Metallers of Ars Amandi.
The history of the band goes way back to 1996, but of the line-up of those days only Dani on Vocals, bagpipes and whistles is still present. And after a debut-album in 2006 the band produced a few albums in succeeding years.
But after their 2010 album it all became a bit more quite. An EP in 2015, a live album in 2018, but not a lot of new work. But now there is ‘En Tierra de Castillos’. A brand new studio album.

A few days ago we published a review on the new Débler album. There are a few similarities here. Again to me the style is a typical Spanish one. But where the Débler is a bit low on the folk-elements, the Ars Amandi album misses a bit of the metal-balls.
There are lots of folk-influences here, lots of bagpipes, whistles and violin, so you can eat your heart out on those. The lines of these instruments are nicely woven in to the music. The instruments are never interfering with each other and they are all very delicately mixed. Good job here.
Most of the Spanish folk-metal bands can be placed in the Power and Heavy metal landscape. Ars Amandi is tending a bit more to the old school Heavy Metal.
Probably due to the language, most of the Spanish bands don’t sound that fierce and furious to me. This is the same here. Don’t expect rude warriors here, no these nobles sound very courteous and elegant. And that’s what bothers me the most, it lacks a bit of tension to me here and there. But hey, maybe I should just learn Spanish.

I don’t think this is a bad album at all. It probably sounds very nice for our Spanish speaking readers. To me a song like ‘Tierra de Aguas’ stands out because I think it has a bit more tension. But above all, very nice to have Ars Amandi back in the scene, because they know what they’re doing with their music!