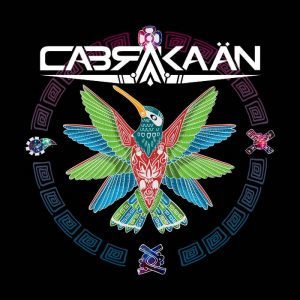 The band Cabarakaän had been founded in 2012 in Toluca, Mexico and later relocated to Calgary, Canada. However the lyrical themes are still about the pre-hispanic times and about Mexican folkore. The band was already releasing an EP called “Songs from Anahuac” in 2014. In 2018 they participated on the “March of the Frozen North Tour” together with bands as Mongol,​ Forsaken Rite and Black Sun Tales. For me it seems that Cabarakaän has two multi-talents with Patrizia on the vocals, who is also responsible for playing the tradional instruments as the Ocarinas, Jarocha harp and the Violin. The second is Marco who is playing next to the drums, as well the Huehuetl, Marimbas and the Teponaztle. When I was discovering Cabarakaän is playing so many traditional folk instruments I was really getting curious about them.The first track “Cem Anahuac” is starting with a very folk touch in order to end up in Melodic Symphonic Death Metal with clear female vocals combined with growls. I was a little bit disappointed that during the parts of the Melodic Death Metal I could not hear any folk instruments playing in the background. At 2/3 of the track the music is stopping for a short break and a very tribal part starts with a lot of folk instruments. Furthermore an indogine speach is fitting perfect to the small break in this track . From that time I was back into it. It is also to state that Patrizia on the vocals knows excactly what she is doing and her voice really reminds me on some great symphonic female metal singers. In general the album is very good produced and all musicians got talent. The second track “Burning Flame” can not be considered as Folk Metal at all, it is simply classic Symphonic Melodic/Death Metal. The same unfortunaley counts for the next track “Huizilin”. Suddenly my interest is back with the epic instrumental track ” The Eagle & The Snake” which is followed by the track “Calm in my Storm”, which is having some folk elements, but again would more consider it as Symphonic Metal. With the track “La Bruja” Cabarakaän fully got me, the track is just lovely. Patrizia is singing in her mother tongue spanish and this is the first track on the album which I would consider as pure Folk Metal. The mix between the Mexican Folklore and Metal is just perfect. A slow, but what a wonderful track! The last track “Blood” also do not include any folk elements.​What to do with such a release ? Basically only the track “Cem Anahuac”, the instrumental work “The Eagle & The Snake” and “La Bruja” should be rated on our Platform. In my opinion this albums will mainly inspire Symphonic Metal Fans, as for this genre the release is really good. If I would only rate the track “La Bruja” I would give this release 9/10 points, but unfortunatley I need to rate the full album. Cabarakaän, I beg you for more staff like “La Bruja”, Congrats to your second EP! ​