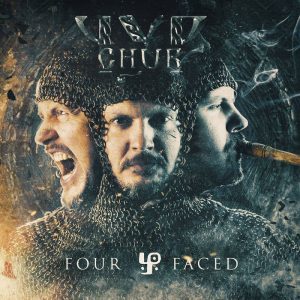 Do you know the feeling, when you are the first time listening to a release and you can’t connect to it ? This was just recently happening to me with thethe fourth full length album “Four-Faced” of the the Urkainian Folk Metal Band CHUR. Suddenly I have almost forgotten, that I should write a review for a newalbum and just pressed the play buttom and finally all the beauty, the harmonies, the atmosphere, simply everything was there. To be honest I never heard of CHUR in mylife before, so it was time to find out a little bit more about this band. The first thing I nearly could not believe is the fact that CHUR is a one man band, namelyYevhen Kucherov, who is playing by himself the Guitars, Sopilka, Drymba, Harps, Bagpipes, Hurdy Gurdy, Keyboard, Perscussion,is singing and even is arranging the programming by himself.CHUR had been formed in 2005 in Kherson (UKR) and has released since then 1 Demo, 2 Splits, 1 EP, 4 Singles and 4 LPs. The name CHUR stands for a Slavik God who protects the houseand the surrounding area. The lyrics are about Slavik Mythology and Ukrainian Paganism. The vocals are in English, partly in Ukrainian and CHUR is mainly using them clearly.On the first two tracks “Goddess” and “Four Faced” Chur is already taking us onto a journey through history and slavic tales and every folk metal fan will be delighted about the various folk instruments played.The song “Wild Steppe” is held in Ukrainian and is giving the song a very authentic touch. I just have the feeling that Yevhen Kucherov is more secure, when singing in his mother tongue. “Tyra” is as well such a highlight on the album, which is kept in Ukrainian and stuffed with a huge load of Folklore. On the song “River” CHUR is again playing, same as in the first song “Goddess” with the variation of languages in the lyrics. The Outro “Steppe Hot” is an intrumental track and CHUR is showing us once more their/his big potential, playing all kinds of folk instruments and beeing a very talented song writer. In my opinion there is only one weak points, which is that there could be a lot of enhancements on the production and mastering side of the record.I see CHUR as a raw diamond, who just would need some help on the one or other side, but is general are on the right track, delivering folk metal at its fullest.For “Underground” Folk Metal Fans this record will be definatley a highlight this year. That’ s for sure!