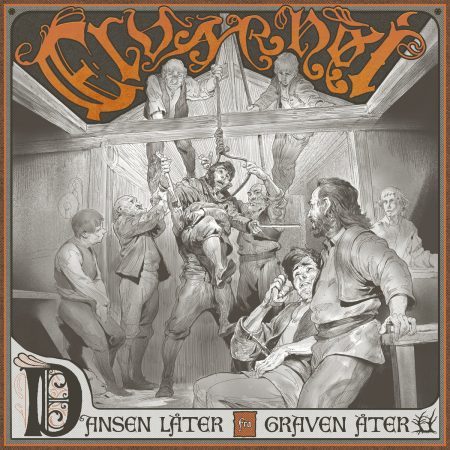 Is is worth mentioning in the Guiness Book of Records when you release your debut-album after 15 years? A now brainer this releasedate, because it’s Elvarhøi’s 15 anniversary. They released an EP in 2006 and besides that 2 singles and a demo, but this is their first full length album.
Despite the fact I won’t advise this schedule to any other band, it can be heard for sure. When you listen to ‘Dansen låter fra graven åter’, you can’t imagine this is an debut. The musicians are not only skilled they obviously know what they want and can achieve this together.
Are there no cons? Yes there are, despite the fact they are listed as a folk-metal band on several places on the internet, even on their own facebookpage, I would say their style has shifted to folk-rock with this album.

After a nice intro, the band has a nice story about a king for us. The story is no less over 8 minutes long, but it’s interesting in every measure it counts. After this a slightly louder track ‘Knenningsvisa’, the guitars are more solid in this one, but the flute have this very nice serene sound and the violin sounds are very nice and folky.
But they have more in stock ‘Det grå riket’ is a very good ballad. Like most of the tracks, it isn’t a short one. Besides the intro there are only two songs shorter then 5 minutes!
The second longest track ‘Vertshuset Dovregubben’ is my favourite track of the album. This track contains all elements a like to hear in this music, well despite of the fact it may be a bit louder. I’m not familiar with the Norwegian language, the song is about an inn, but don’t expect the usual drunken-song here. The band has found different perspectives to look at things. I’ll make it easy for myself and quote the band to give you an opinion what’s happening in this inn.
“The track itself tells the story of a plucky youngster who, one especially cold winter night, comes across an invitingly warm tavern, filled to overflowing with all sorts of characters and strange artefacts. Here he witnesses his first hanging – that of a fiddler accused of possessing the good people of the town. As the noose tightens, it generates a tone that resonates within the fiddle, which starts to play on its own, and before his mind’s eye the fiddler can see the long afterlife amongst the hills that awaits him, and all the others in the room.”
Nice harmony-singing is added to the flutes and violin, and again this track has lots of different elements, which can keep your attention all the way.
The only song which doesn’t work for me is ‘Tilbake til intet’, I can imagine if you understand the language this song fits in here in the album. I get the opinion the album is is telling a story and this soundscape is a piece of the whole pattern of the album. Maybe I’m completely wrong with this, but that’s the feeling I get when I listen to the album as a whole.

This is definitely the best debut-album of 2019 for me personally, despite of the fact it’s solid but not really 100% metal.
Do you like Scandinavian folk, please don’t hesitate to give ‘Dansen låter fra graven åter’ of Elvarhøi a listen. The band and the album truly deserve this!!!