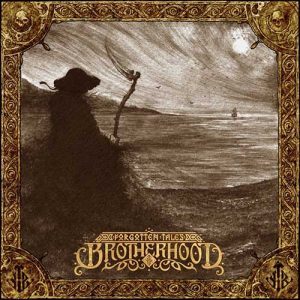 I stumbled across the debut EP from Forgotten Tales Brotherhood a few weeks ago on Bandcamp and was wondering if we were going to review it. I guess I must have made it happen as it arrived recently, and I snatched it up and was able to put a quick review together since I’ve heard it numerous times already. “And So It Begins” features 3 tracks totaling just under 18 minutes and is an independent release which came out on September 22nd. Who is this new act? Hailing from the Brittany region of France, it appears there are 2 main members with some guests……Tanguy (guitar, bass, vox) and Thibault (orchestration) seem to be the primary contributors with a few others adding in vocals, drums and violin. Stylistically, I think you will find they are still finding the proper formula that clicks but this release is solid. There are two opposing factors while I listened, and I would maybe tend to say they have a slight identity crisis. How so? Musically, the tracks I think prototypical folk metal with a diverse number of riffs, instrumentation, vocals (both main and choral) and tempo changes within the two tracks with lyrics (“And So It Begins” and “Dead Men Tell No Tales”) and the instrumental track (“We’ll Get To Drink Again”). The issue I would have is in the vocal choices and the lyrical content as they don’t really match what is going on musically. The tracks with lyrics have a pirate-centric theme which I don’t think really match the musical style. I tend to think of more sea shanty, up tempo, jig style music with pirate metal acts like Alestorm, Lagerstein, Swashbuckle, etc. If the tracks had different subject matter, I think they would be more successful. I also think the baritone/clean style of vocals employed by Tanguy is a little too morose for the music. In contrast the “extreme” vocals of guest Romain Nobileau (he of the epic Toter Fisch….yes a pirate metal band) work much better in delivering the message. I really like the music and overall I think this is a pretty decent EP despite some of the issues…..the music is solid and catchy and shows a lot of promise. Even the instrumental track is worthy of a number of listens with a nice mix of symphonic, heavy and acoustic. The fast stuff works well with the slow stuff and I would say overall I was reminded a lot of a combination of Sekengard, Ash Of Ashes and new act Temple Of The Stars. The sound is pretty killer for a first effort with a punch and clarity to it…. guitar is full and the orchestration, instrumentation, percussion and vocals are all easily heard. Was I a tad harsh? If I didn’t care I would just say “eh, decent or whatever” but I think there is a lot of potential here and I believe it will still end up being a top EP of the year for me, even with some of the issues. The ideas and talent are there but I feel branching out into some different lyrical directions that work more in tandem with the music would serve them well. Good first effort.