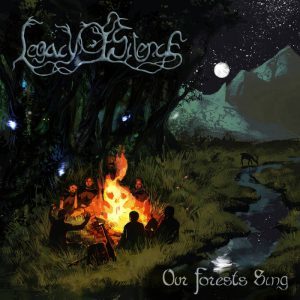 What a year for the Italian Folk Metal Scene! We already had been blessed this year with strong releases from Furor Gallico, Atlas Pain, Folkstone, Calico Jack and Elvenking (sorry if not complete). However during all that hustle we nearly oversaw this great band called “Legancy of Silence” out of Turin, who already released their Debut Full Length Album “The Forests Sing” in May this year.
Already the first track “Witchwood” is bringing us pure Folk Metal with a big chance to create a earworm. The harmony and the atmosphere is fitting perfectly to the lyrics, which are mainly consisting of growlings ( partly clean), and the flute is furthermore bewitching us. For me this is the strongest song on the album.
On the next tracks “Bloodhunt” and “Misfortune” they show us a harder side of them, the melodies are getting harsher without losing the mystic and folky touch.
My personal next highlight is the song “Heresy” which is combining a real great guitar riff playing with the flute. The songs “Misfortune”, “Inquisition” and “Nightfall” had already been released on their EP “Nightfall” in 2017 and are fitting perfectly to the other songs of this release. The last track “Rebirth” starts with a kind of nice chant and is showing again the strength of Legancy of Silence in giving us the full spectrum of the band. From chants, clean parts, gowling, flute, slower parts and hard guitar riffs. All what the Folk Metal heart demands! I consider this release as a very strong debut album and would like to congratulate the band for the same!
For CD collectors like myself I can only give you the hint that you can find the physical album on amazon.de or amazon.it