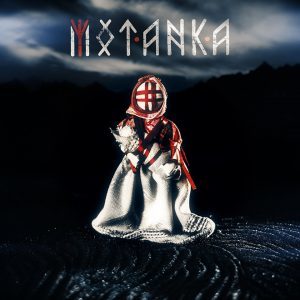 Sometimes it is hard to say if a band fits into the genre folk-metal and especially with Motanka you will find it quite hard to make this decision. The Ukrainian band Motanka is presenting us on their debut a mix of traditional folk and mystic music elements combined with alternative Metal and Rock. Already the Intro “Alatyr” is creating a very mystic atmosphere and is slowly preparing you for the first track “Fire Burns”, which starts quite slow with clean vocals, only to explode with the refrain and a massive gitar riff. Now the direction is given and the variation between soft and harder episodes in the songs combined with great harmonies continues as well in the next track “Air”. With the tracks “Des’u horakh”,”Oy ty moya Zemle” and “Bosymy nizhkamy”  Motanka brings you nearly to a meditative condition and is further on combining the folk elements with sometimes softer and sometimes harder alternative rock/metal. With the track “Voroh” you reach another peak of this release. Especially in this song you can hear the fantastic combination of various music genres (metal,rock,folk,epic elements) combined with clean and growling vocals. Basically the album continues this way and brings you from one highlight like “Horizon” over “Khreshchennya” to “Verba” until the Outro “Kroda” releases you from your trance and brings you back into life. For me this debut is one of the strongest releases I heard this year, as it shows no weakness at all. The only thing is that you need to be open for it, as I never heard any band creating something similar. Big congrats to the band in composing such an innovative debut.