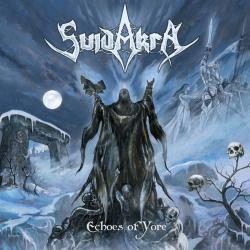 The past six years have been a productive time for Suidakra with the release of no less than an EP and four albums including their upcoming effort Echoes of Yore. After going in a direction that leans considerably towards the Folk end of the spectrum Suidakra have apparently decided to celebrate their 25th anniversary by churning out Echoes of Yore, perhaps in an attempt to regroup and plan what route to take next. For those still unaware, the upcoming Suidakra release is a collection of their early material rerecorded and released as a full-length album. As many readers will probably have heard most of, if not all of these tracks, this review will touch only on the production standards, selection of songs, and delivery as compared to the original albums.
Firstly the production quality has improved substantially, especially on some of the more raw sounding black metal-influenced releases. Musically, the improvement in sound quality makes the subtleties of the folk melodies and bass-lines more audible which offers a slightly better overall experience. Aside from enabling casual listeners to better appreciate the instrumentation if one compares the change in songs like “Hall of Tales” off Auld Lang Syne, one can only imagine the improvements on the tracks from their debut album. One potential drawback with the crisper sound is there is a less ominous feel to songs like “Pendragon’s Fall” and the aforementioned “Hall of Tales”. Whose grim feel were a part of their charm. On “Rise of Taliesan” the improvement in audio quality has the issue of making the orchestrations feel more like keyboard patches than actual instrumentation.
Overall with the exception of about three songs with sizable acoustic portions (and only one of those approaches anything near ballad status) the songs featured here are overwhelmingly of the heavier and more aggressive selections. With such high production standards, it remains difficult to tell whether there was more energy and abrasion to begin with or if the slight improvement over the original studio works were due to excessive mastering. However, an improvement there is, and whether or not the band was better this time around is a separate question.
In many ways Echoes of Yore is the ideal starter album for anyone unfamiliar with Suidakra. Unlike live albums or compilation albums, re-recordings such as this are essential for any fan of the band dedicated enough to buy a “best-of” album that doesn’t have all the commercial or effortless connotations. For those that have any attachment to the original studio releases’ sound or like the more stripped down Suidakra, may want to avoid this album.