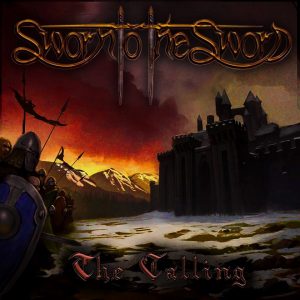 To be honest I found this band coincidentally via an online platform and never heard of them before. After listining to their album it was just confirming my general attitute that there is so much good bands out there, which need to receive more attention. Sworn of the Sword is based in Dallas, Texas and was formally active under the name “Fenris”. It seems to me that those six musicians are the placeholder in the Texan Folk Metal scene, already playing support shows for bands like Ensiferum, Alestorm, Helsott and Arkona. The release “The Calling” can be considered as their debut album under the new name “Sworn to the Sword”. They describe their style as Melodic Folk Metal / Battle Metal and I personally would also add the tag “Epic” to it, but now let’s go to the review of their release: As the most of the Folk Metal releases the album starts with an very epic intro “The Calling”, which prepares us for the battle tales in front of us. The first song “Troll Cleaver” is already showing us the full variety of this great band. They are offering us growls, clean vocals and battle shouts combined with an very epic folk composition. After the “Horns of War” are blowing us still into the battle the next song “Erlking” is a highlight for me. When you are grown up in Austria basically at school every student needs to learn the ballad Erlkönig (Erlking) from 1782 of Wolfgang Johann von Goethe, so it seems that this work never lost its importance and I was really curious how Sworn to the Sword will interprete the same. The first time that I was listening the lyrics of the Erlking in English. Big compliments to the band, I really loved their interpretation and the first time in the album you hear as well female vocals which fits to the variety between the growls and the clean vocal parts. My next highlight was the track “Goblin”, which puts a smile into my face, as at the beginning you will hear a goblin grunting something, which comes quite unexpected and generally the song shows that the band also have a good sense of humour. On “life builder” Sworn to the Sword is again showing a different side of them as the female vocals are dominating the first part of the song and the lyrics are becoming again more serious.With a lenght of 13 songs (including the Intro) and a very long running time of 64 minutes this release never becomes boring. Sworn to the Sword are bringing us with “The Calling” a very solid debut with a lot of variety in the music and vocals. The only downside is that currently I could not find any physical copy to buy from them, as this release is currently only available via digital formats as Spotify and Amazon. For all CD collectors we can only have the hope that they will release it as well as physically, I would buy it!

Sworn to the Sword Video

Sworn to the Sword Links