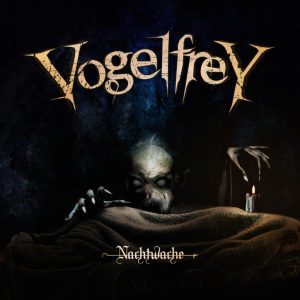 It’s two years ago, when the Medieval rockers of Vogelfrey released their last album, so it’s time for a new one. And to be honest at once, that’s how it feels sometimes.
On this album we can find 10 songs in the Medieval rock style we’re used to by Vogelfrey. The album starts of with the track ‘Ära des Stahls’, a very nice opener for this album. The music is immediately filled with metaphors, Asgard, Olympus, The Holy Grail and a bunch of other metaphors pass by.
‘Schüttel dein Haupt’ is despite of the, in my opinion, terrible video quite a nice track, so bang your head with this one! Jo is once again doing a fine job at the cello, the cello-melodies are a nice ingredient, not only in this song, but throughout the whole album.
With ‘Magst Du Mittelalter?’ the mandatory part of the album is becoming more obvious. The humor in the song is a bit more forced in my opinion, but it can get even worse as shown in ‘Metamnesie’. The music has become more adult, the bandmembers haven’t it seems. After another good song ‘Sündenbock’ where the band has really something to say, the band goes one with their adolescent humor in ‘Alptraum’.
Luckily we get to decent songs after this and there the album should have ended.
Coming from Hamburg Vogelfrey decided not to release ‘Auf St. Pauli’ for their numerous from Hamburg, but to put in on this album. I think it had been better if this hymn for their favorite soccer track would have been released separately.
A decent album, which will find the way to the die hard Vogelfrey fans easily, but for me it could be more exciting.